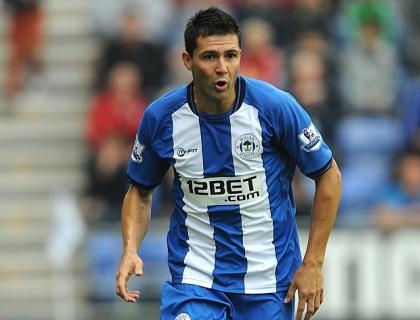 The 30-year-old Paraguay international, a free agent after his contract with the relegated Latics expired, has agreed a two-year deal the club have confirmed.

Alcaraz follows Martinez and striker Arouna Kone, who signed for three years on Monday, in leaving the DW Stadium for Goodison Park.

Last season was a difficult one for the defender as a groin injury sustained on international duty ruled him out for six months from late August.

However, after passing a medical he was able to finalise a move which has been a couple of weeks in the negotiating after securing a work permit.

Martinez has said previously if Alcaraz had been fit for the majority of the season Wigan would not have been relegated.

Of the 14 appearances he made last year, six resulted in clean sheets, including a particularly commanding performance at Goodison Park as Wigan knocked Everton out of the FA Cup at the quarter-final stage.