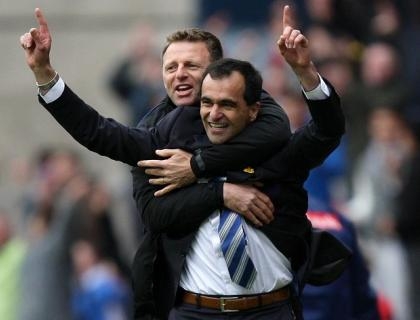 Assistant Graeme Jones, chief scout Kevin Reeves and goalkeeping coach Inaki Bergara plus a member of the Latics' medical staff have all followed the Spaniard to the Premier League club.

Their arrival was made possible by the departure of Steve Round, Jimmy Lumsden and Chris Woods to Manchester United to link up again with former Toffees boss David Moyes.

And another reunion is on the cards as Wigan chairman Dave Whelan claims Martinez is the favourite to sign striker Arouna Kone from the relegated club despite bids from two other sides.

"Roberto has taken who he wants with him," the Latics chairman told Press Association Sport. "That deal has been done and we have already filled the vacancies."

Whelan said there was no compensation involved as he regarded the settlement he received from Everton for Martinez, believed to be around Â£1.5million for the Spaniard's final year of his contract, enough. "We wouldn't even attempt to (get compensation) for staff who worked with Roberto as we got what was due to us for Roberto," he added.

Kone appears the next in line to join the migration to Goodison Park despite competition from elsewhere.

"Three clubs have made offers for him - Everton is definitely one - as he had a clause in his contract that he could go if someone paid Â£5million," Whelan added. "It is really up to him where he wants to go now and I think he will go to Everton."

However, Whelan is keen to hang on to his other key players - such as midfielder James McCarthy - to give Martinez's successor Owen Coyle every chance of getting back in the Premier League.

"We have always got interest in one or two lads but we have hopes of holding on to them," said the Wigan chairman. "We have had people asking of course but we have had nothing serious on the table."