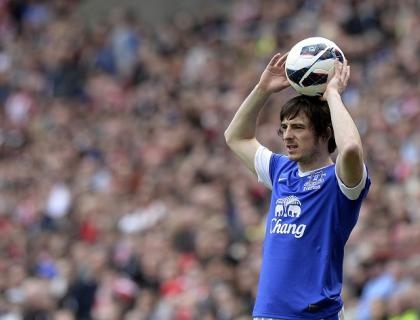 United boss David Moyes, who does not technically begin work at Old Trafford until Monday, returned to his former club with a bid of about Â£12million for the defender, but Press Association Sport understands it was dismissed out of hand by Everton, who have stressed the 28-year-old is not for sale.

While the Toffees are determined to maintain that stance it is unlikely to deter United, who can offer Baines Champions League football at a time when he is probably at the peak of his career.

Last season the left-back created 116 chances - more than any other player in Europe's top five leagues - and was named in the PFA Premier League Team of the Year for the second successive season.

Baines has been Everton's most consistent performer over the last couple of years and while they are not prepared to consider a sale the club value the player, who is close to deposing Ashley Cole as first choice in the national team, much higher.

Manager Roberto Martinez, who succeeded Moyes at Goodison Park, is due back in the country on Friday after his commitments as an American television pundit for the Confederations Cup are over. He will meet his full squad for the first time when they return for pre-season training on Wednesday.

The Spaniard stressed from the moment he was appointed he wanted to keep his squad intact - with midfielder Marouane Fellaini the other player linked with a number of clubs.

Chairman Bill Kenwright reiterated that view on Wednesday when he said: "He (Roberto) wants to hold onto it but he also wants to bring in two or three players in the positions were we need them.

"He hasn't met the squad yet. The first step is to get the players back and get to know them and bring in two or three."

Kenwright reportedly claimed, in 2011, Baines was one of the four players he dare not sell - the others being Fellaini, new captain Phil Jagielka and goalkeeper Tim Howard.