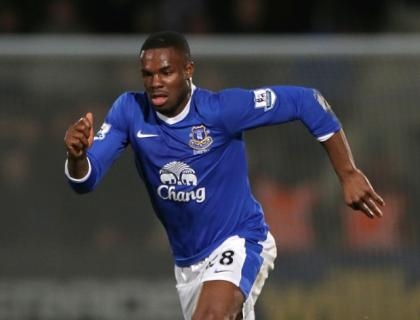 Police arrested the 42-year-old after he was reported to stewards and police officers by fellow Evertonians as he watched the game with his wife, 16-year-old daughter, 11-year-old son and three-year-old grandson.

Blything, of Moss Pits Lane in Wavertree, Liverpool, admitted he used foul language during the game but denied a single count of racially-aggravated intentional harassment, alarm or distress.

Giving evidence in court on Monday, Everton fan Neil Jordan said he was "outraged" by the abuse and had tweeted a picture of Blything, referring to him as a "racist t***" before reporting him to stewards.

Mr Jordan said he first noticed Blything as he made one of his children cry by telling him to "man up" when QPR scored a goal. He later heard the defendant refer to Anichebe, who is originally from Nigeria, as a "f****** black monkey" several times.

Mr Jordan said: "At that point I realised that it wasn't an isolated incident. There was clearly some intent to target that player because, in my opinion, of the colour of his skin, coupled with general agitation and abuse aimed at the home end and abuse towards another opposition player."

Louise Thomas, prosecuting, told the court that Mr Jordan described how he was left "shaking and distraught" by the abuse. Also giving evidence, Everton fan John Murmame said he heard Blything shout "Take down that chink" in reference to Park.

"I go to a lot of football games but this was exceptional," he said.

The match saw QPR defender Anton Ferdinand and other team-mates refuse to don a T-shirt in support of anti-racism campaign Kick It Out. Last October, Chelsea captain John Terry was given a four-month suspension and Â£220,000 fine for racially abusing Ferdinand during a match in October 2011.