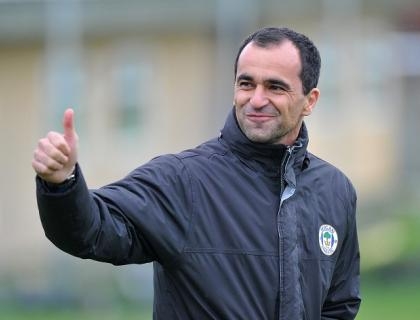 The Spaniard has been in talks with the club over the last couple of days after the Toffees agreed a compensation deal, believed to be about Â£1.5million, with Wigan.

Martinez, 39, has always been the long-time favourite to succeed Manchester United-bound David Moyes after his 11 years in charge.

Martinez emerged as the outright first choice of chairman Bill Kenwright after he considered a three-man shortlist, believed to also include Porto's Vitor Pereira and former Schalke coach Ralf Rangnick, over the weekend. However, the Toffees' interest in the Latics boss was registered some time before that when it became clear the Spaniard was considering his position following their relegation from the Premier League.

Everton made an official approach on May 24 and four days later Martinez told Wigan chairman Dave Whelan he wanted to leave as he did not feel up to the task of getting the club out of the npower Championship.

However, despite the negative connotations of taking a team down Martinez enhanced his reputation by winning the FA Cup - something Moyes never achieved - by beating Manchester City at Wembley last month.

He is renowned for playing an attractive style of football and working on a relatively stringent budget, both of which appealed to the Goodison hierarchy.

"The way he plays the game, the fans are going to like the style, and I think the players are going to improve, and that's really important," he said.

"Everton have wonderfully gifted players and I think he will give them a new lease of life."