​Everton host Burnley at Goodison Park on Friday night as they aim to continue their strong finish to the Premier League season.

Marco Silva's side played out a goalless draw away to Crystal Palace last time out, though they did humiliate Manchester United 4-0 the week prior. They have won four of their last six matches in the top flight, losing just once in that run.

The visitors were narrowly edged out 1-0 by Manchester City last weekend having claimed an impressive 2-2 draw at Stamford Bridge six days before, their survival now guaranteed.

Here's the lineup Silva could choose for Friday's ​meeting. 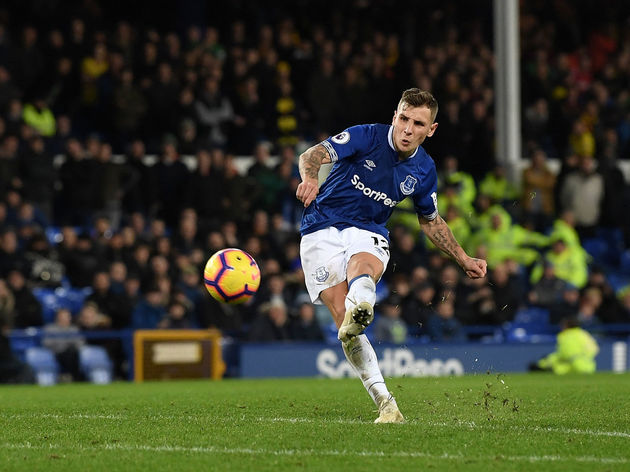 Jordan Pickford (GK) - England's number one has struggled for form since returning from Russia, though he now looks to be getting back to his best. That is demonstrated by the fact that he has kept seven clean sheets in his last nine ​Premier League appearances.

Seamus Coleman (RB) - The Irishman possesses lightning speed and is always a willing runner, constantly providing an option for teammates. One of the most underrated defenders in the division, Silva will be mightily pleased to have Coleman at his disposal.

Michael Keane (CB) - Inclusion in the latest England squad was just reward for Keane's fine showings this term. Whereas before he was shaky and indecisive, now the 26-year-old appears fully assured of his own abilities.

Kurt Zouma (CB) - The ​Chelsea loanee is a fierce force at the back for the ​Toffees, dominating opposition attackers and valiantly protecting his goal. Chris Wood may be a combative striker up front for ​Burnley, but he will struggle to overpower Zouma.

Lucas Digne (LB) - Everton have splashed the cash rather lavishly in recent transfer windows, yet arguably their finest bit of business was bringing Digne to Goodison Park for around £18m last summer. He has bagged some marvellous goals this campaign, including a sumptuous double in the reverse of this fixture at Turf Moor. Idrissa Gueye (CM) - Links to Paris Saint-Germain emerged over the winter, but Gueye stayed put. Silva and the club's supporters will be thankful for that, the Senegal international having developed into a superb all-round midfielder.

Morgan Schneiderlin (CM) - The Frenchman has never quite been the same since leaving ​Southampton for ​United, becoming something of a scapegoat at Old Trafford. Though he is now performing soundly, he is yet to rediscover the form he showed in red and white stripes.

Gylfi Sigurdsson (CAM) - This man is lethal from long-range. With remarkable technique and awe-inspiring power, keepers are powerless to stop Sigurdsson piledrivers. He got on the scoresheet against the Clarets in December, though that was actually from the spot. Dominic Calvert-Lewin (ST) - At just 22 years of age, there is still plenty of time for the youngster to become a top level marksman. With eight goals in all competitions this campaign, he's not exactly setting the world alight, though it is a reasonable base to progress from.

Bernard (LW) - Deft, jinking dribbles from Bernard have left many a Premier League defender back-peddling. The nimble winger is so slippery, offering an excellent attacking outlet for his side.