The Toffees ended 2018 with a defeat despite creating some bright early moments at the Amex Stadium which could have yielded a different result if the visitors had taken their chances in the first half.

Silva admitted that the result was ‘frustrating’ but insisted, as quoted by ​Everton’s ​official website: “It is important to be strong again and ready for the next match in three days.

“We don’t have time to prepare in the normal way but that is the schedule and we have to put in our players’ minds how important the next game is.

“We have to change our recent form at home and give a different answer. It will be a tough match [against ​Leicester] but we have to give 100 per cent to win it.”

Terrible day if you played for Leicester, Everton and Spurs. It’s all gone quiet over here. 蘿

Silva admitted that Saturday’s result could have panned out differently if Everton had made more of their chances but admitted that the Toffees were not at their best at the Amex.

“It was frustrating for us,” Silva added. “We came into the game from a good away win. Even if it wasn’t the best performance or best game for us…we created enough chances to achieve a different result.

FT | Blues hit the woodwork twice in a disappointing end to 2018. #EFCawayday

“We created more clear chances than ​Brighton, even if we did not play our best.

“We did not start as fast and aggressive as we planned but after we started to play in our way, in the last 15 or 20 minutes of the first half, we played some good football and created good moments.

“Jordan [Pickford] made a fantastic save but after Brighton scored from that deflection I did not see many chances for them.

“After that we had the chance for Richarlison and the ball off the bar but it wasn’t enough for us.” 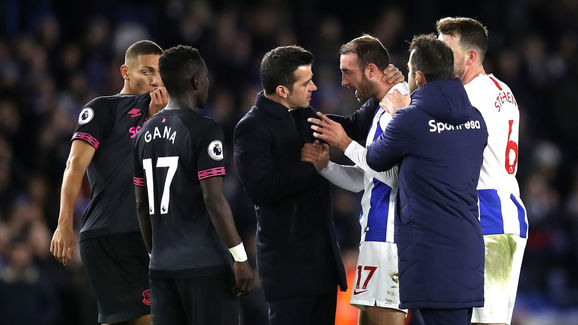 Silva will look to lead his side back to winning ways in the Premier League as Everton host Leicester at Goodison Park on New Year’s Day.