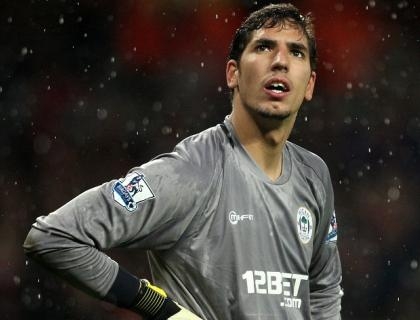 "Atletico Madrid and Everton have reached an agreement for the transfer of Joel Robles to the English club," said a statement on the Spanish club's website.

"The goalkeeper, who ended last season playing on loan at Wigan, will compete in the Premier League following the agreement reached between the three parties. In our club we wish him luck in this new stage of his career."

Alcaraz, who also played in the cup final, had a difficult time with injuries and missed six months with a groin problem. The 30-year-old Paraguay international, a free transfer after his contract expired, agreed a two-year deal.

Until the manager sends out his first side there has been no indication whether he will introduce his three-at-the-back system he employed at Wigan. If he does not then Alcaraz is likely to be battling established first-choice central defensive pair Phil Jagielka, Toffees captain, and Sylvain Distin for a place.

"There are always good players at every club. When you go to a new club you must work hard in training to get the opportunity," he said. "Competition is always good - the more quality within the team the more you can improve yourself."

Alcaraz admits the chance to remain in the Premier League and work with Martinez again were the significant factors in joining Everton.

"We talked to a lot of clubs but I was always interested in staying in the Premier League," said Alcaraz. "I know him (Martinez) really well and he knows me very well also. We had a very good relationship in the three years at Wigan and I want to continue that. Nothing is going to change, he is very professional."