Martinez eager to hang on to Baines 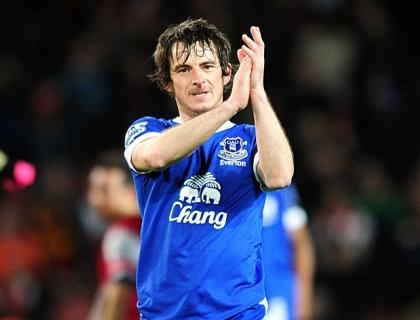 Baines, who has two years left on his current deal, has been linked with Manchester United for the last couple of summers and former boss David Moyes' appointment as Sir Alex Ferguson's successor at Old Trafford will only increase speculation.

"It is very important and it's (about) rewarding players who have been phenomenal for the football club and I think Leighton is in that category," said Spaniard Martinez. "The chairman is very keen to express that and obviously I'm desperately looking forward to meeting the players."

He added: "For Leighton, as the top performer he has been in the last few years, it is important that we reward his work and make sure that he can look forward to kicking on and go into the next chapter of his career with Everton. That's important for the club as a whole, not just the dressing room."

The centre-back was told by Moyes last season he would assume the captain's armband from the retiring Phil Neville, having done it on the occasions when the veteran midfielder was unavailable.

Everton's new manager sees no reason to change that decision as he believes Jagielka is at the very top of his game.

"I've been a big admirer of Phil and I do feel now he is at the peak of his career in terms of the leadership he has achieved when representing England and for a few seasons at Everton," he told evertontv.

"It is the right moment for him to take that role and for me it is very representative of the standards of the club on a daily basis.

"I know he is going to embrace that role and is going to be a perfect fit for a role which has traditionally been a great honour."