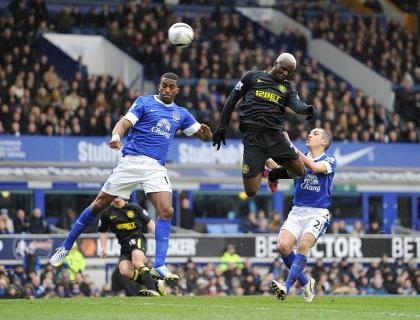 The 29-year-old Ivory Coast international on Monday signed a three-year deal to be reunited with his former Wigan manager. He scored 13 goals for Latics last season, having missed a month for the African Nations Cup.

Despite his arrival leaving some Everton fans unimpressed, Martinez is confident a player he knows well will win them over. "He's got everything that an Evertonian would expect of a striker," said the Spaniard.

"The work ethic, the technical ability to score goals - that's always essential in a striker. But probably the biggest strength that Arouna has is that calmness in front of goal, that composure to be a real reference for the team."

Kone has played in Belgium, Holland, Spain and Germany before moving to England and Martinez believes that will stand him in good stead as he makes the step up a level.

"Arouna brought a real impact to his debut in the British game [last season]," he told evertontv. "He had great experiences in Holland and a great transfer to the Spanish league.

"He had a bit of a tough time with his injury but he recovered himself really well to score many goals with Levante. His arrival to the Premier League has been a very successful and impressive one.

"To be able to be himself straight away, someone who copes with the physicality of the game but brings a really strong back-to-goal play in the forward position and with real quality finishing in his make-up. As a player I would say he is a complete footballer at a really good age."

Kone is delighted to be reunited with Martinez. "For me it's an honour to be back working with the manager once again," he said.

"Last season he really helped me a lot. For my first season I did the absolute best I could but I think that joining up with him at this club is like another dimension for me and I hope that I'm going to continue to improve alongside him."