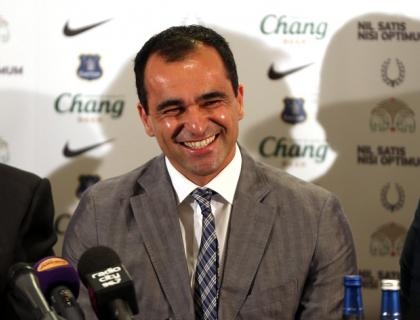 The Spaniard has signed a four-year contract to take over from Manchester United-bound David Moyes, and while he sees similarities with his other jobs in football, he knows this one is different.

"I know what it means to play for this club in terms of the amount of families (involved) and passion which comes across, so I understand how honoured I am to have this position," said the 39-year-old, who left Wigan after four years.

"I can't describe it but when we (Wigan) played here in the quarter-final of the FA Cup (winning 3-0), there was a feeling that you can develop and know you belong and, funnily enough, now I can start exploring it and finding out what the fans want.

"It is very important in modern football not to lose the real values in the modern game and it is important to understand the fans, and Everton have really strong football values with an incredible passion.

"When I arrived at Goodison, I got that feeling right away. I know I can fit in quickly and feel part of it straight away."

Martinez is confident he can retain the club's in-demand stars, like midfielder Marouane Fellaini and England left-back Leighton Baines, and fulfil a Champions League dream.

"In the game when you are successful - and Everton were clearly successful last season - you will always get good performers who attract interest from other clubs," he said. "That not only happens here, it happens at every football club in the land and abroad, so we're not worried about that."

"I'll give him a few quid to spend. The others are not for sale. We don't want them to go, they have worked massively hard for this club," he said. "Roberto doesn't want them to go, he has all their numbers and he will be on the phone asking them not to go. Not one person has even half-indicated they want to go."