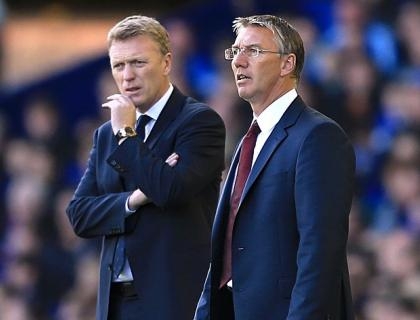 The Toffees will be the opponents on Monday when Mauricio Pochettino takes charge of his first Saints match. The Argentinian was immediately installed in the hotseat after Adkins was shown the door despite successive promotions and with Southampton sitting 15th in the table, three points clear of the relegation zone.

Moyes said: "I'm very surprised. I was talking to my staff during the week and complimenting how well Nigel Adkins had done. It was always going to be difficult after two promotions. Anybody who does that coming up, it's a long way up."

The Scot continued: "He'd just got himself out of the bottom three and moved up and I don't think there would have been many people looking at Nigel Adkins to be sacked in that position."

Moyes will celebrate 11 years in charge at Goodison Park in March but the faith shown in him by chairman Bill Kenwright and the board is an increasingly rare commodity in football.

He said: "I don't know if we are scratching our heads any more, and that's probably the football world we're in.

"I'm not saying it's the right one, and I'm not just willing to brush it aside. But that's the way it looks just now.

"I'm really fortunate and, if you look at the clubs who have kept their managers for longer periods, I think that's tended to work better than continually changing managers."