Robles next man in at Everton 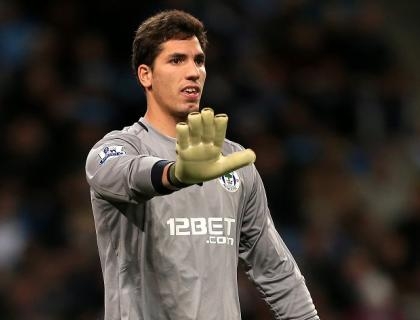 The pair both worked with the Spaniard at Wigan and have joined striker Arouna Kone, who signed a three-year deal with the Toffees on Monday, at Goodison Park.

Martinez brought the 23-year-old Robles in on loan at the DW Stadium and he soon displaced Ali Al-Habsi as first choice and featured in Wigan's FA Cup final win over Manchester City. He has signed a five-year contract for an undisclosed fee.

Everton had worked on the Alcaraz deal for some time and the Paraguay defender signed a two-year contract after passing a medical and sorting out his work permit paperwork.

Last season was a difficult one for the defender as a groin injury sustained on international duty ruled him out for six months from late August. Martinez has said previously if Alcaraz had been fit for the majority of the season Wigan would not have been relegated.

Of the 14 appearances he made last year, six resulted in clean sheets, including a particularly commanding performance at Goodison Park as Wigan knocked Everton out of the FA Cup at the quarter-final stage.

The move for Robles advanced quicker and earlier Atletico revealed the player was leaving them for England again, only this time in a permanent deal..

"Atletico Madrid and Everton have reached an agreement for the transfer of Joel Robles to the English club," said a statement on the Spanish club's website.

"The goalkeeper, who ended last season playing on loan at Wigan, will compete in the Premier League following the agreement reached between the three parties. In our club we wish him luck in this new stage of his career."

Alcaraz and Robles will fly out to meet their new team-mates at a training camp in Austria ahead of this weekend's friendly against Austria Vienna.