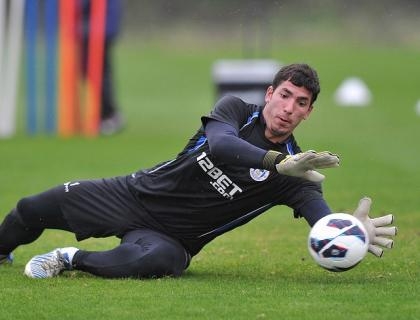 The 23-year-old signed a five-year contract with the Toffees on Tuesday and will be viewed as Howard's long-term successor. However, while the Spaniard is keen to learn from the United States international - Everton's first-team goalkeeper since his arrival from Manchester United in 2006 - he is not fazed by the prospect of deposing him.

"I am a very ambitious goalkeeper. I can't wait to get started at such a big club," he said.

"It is a great honour to come here and work with Tim. He is a great goalkeeper and I am sure I will learn a lot from him.

"Obviously we will be competing together and it's the manager's decision at the end of the day (who he chooses)."

Robles spent last season on loan at Wigan from Atletico Madrid and ousted Ali Al-Habsi towards the end of the season, playing in the Latics' historic FA Cup final win over Manchester City.

Robles is the third player Everton have signed this summer familiar to Martinez, who has also brought former Wigan players Arouna Kone and Antolin Alcaraz to Goodison Park as well as four members of the Latics backroom team.

The goalkeeper is grateful to extend his stay in the Premier League but he will not be resting on his laurels having secured a permanent deal.

"It was a fantastic experience to come to the Premier League, it is clearly the most important league in the world, and I am delighted to have the opportunity to continue at a club like Everton," he told evertontv.

"Roberto Martinez being here was a major factor in me coming here. I firmly believe that Roberto will take Everton to even greater heights and we are all here to achieve that aim."