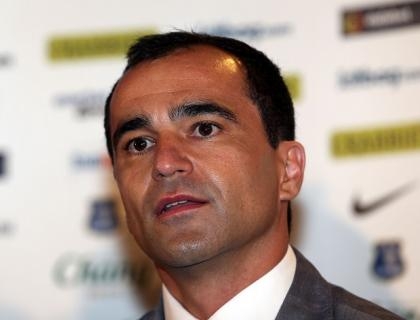 "We've brought people with real experience in the Premier League already," Martinez said. "They bring a real understanding of how we work and what we need to reach with the players and help them as quick as we can to be a strong team at the start of the season."

He added: "What we have is a lot of important people at the football club that have excellent results and we'll make sure we get together to be ready for the start of the season."

While work continues to finalise his first transfers as new manager - also likely to be familiar Wigan faces in striker Arouna Kone and defender Antolin Alcaraz - Martinez's main focus is getting his side ready for the upcoming season.

Martinez met many of his players for the first time on Thursday as they are returning for training at staggered intervals depending on their summer international duty.

"We're all getting ready at Finch Farm, every single department, for an exciting season," he told evertontv.

"Obviously the players coming back from their well-deserved break is something we look forward to. That's going to happen in stages.

"The players that have been involved with the national teams - that will be reflected in the time that they will have as a recovery period.

"Going to Austria as well is a very important moment in our pre-season. We're going to be able to work with a lot of volume and preparing those bodies for a demanding season ahead."