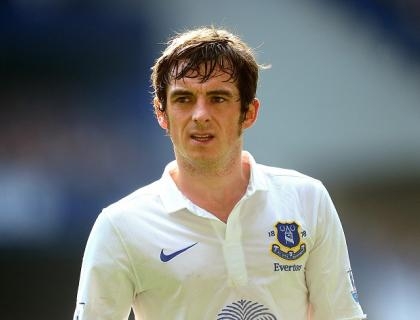 Former Toffees manager David Moyes has made a move, expected for some time, to take the England left-back to Old Trafford with him, but the Merseysiders are in no mood to allow one of their prize assets to leave and are not prepared to negotiate.

Press Association Sport understands United have made an offer to Everton for Baines, with reports suggesting their opening bid was between Â£10million and Â£12million.

While that figure is way below what the Toffees believe is the market value for the 27-year-old, who is now challenging Ashley Cole as England's first-choice left-back, the club consider it irrelevant as they have no intention of letting him go.

Manager Roberto Martinez, who succeeded Moyes at Goodison Park, is due back in the country on Thursday after his commitments as an American television pundit for the Confederations Cup are over.

The Spaniard stressed from the moment he was appointed he wanted to keep his squad intact - with midfielder Marouane Fellaini another player linked with a number of clubs.

Chairman Bill Kenwright reiterated that view on Wednesday night when he said: "It is difficult for me talking for Roberto but he thinks the squad is fantastic. He wants to hold onto it but he also wants to bring in two or three players in the positions were we need them. He hasn't met the squad yet. The first step is to get the players back and get to know them and bring in two or three."

Only on Wednesday Baines, Everton's most consistent performer over the last two seasons, spoke of how keen he was to start working with the new manager after his switch from relegated Wigan.

"He was one of the first names linked with the job and the feeling straight away was he would be a great appointment," he said. "He has a different style to what we have been used to but I think it is progressive and it will move us forward.

"It is also exciting for the players to be able to try that now. The style in general appeals to a lot of people. We have time to work on it, whether it is a different style of play or whether the formation changes. By the time we kick the first ball of the season we will be well versed on what he wants to do."