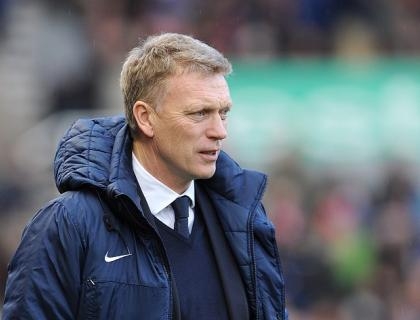 Injuries to key players - with midfielder Darron Gibson ruled out for a month with a thigh strain and forward Kevin Mirallas sidelined for a second time with a hamstring injury - have taken their toll over the festive period.

"The mood is fine, we are healthy enough - I'd like a few more players back from injury but so would a few clubs," he said.

In Sunday's home defeat to Chelsea Moyes was forced to pick 18-year-old reserve-team defender Tyias Browning among his substitutes so limited were his options.

Things have improved slightly with the return from suspension of Marouane Fellaini and the possibility of Phil Neville being fit again after being rested having complained of pain in the knee he had an operation on recently.

But Moyes' management skills are being tested to the full once again and he accepts he may sometimes have to tinker with his tactics.

"It is a busy time and I wouldn't say it is a time of year when managers and players want game after game," he added.

"We've had them (Gibson and Mirallas) out before. Kevin and Darron are important players for us but that is what happens. It is a test to try to find teams that can win without your best players. You have to find solutions."

One of the changes which looked like paying off against Chelsea was moving Steven Pienaar into a central position behind striker Nikica Jelavic from where he scored in only the second minute.

"I don't think his biggest thing is scoring goals but we've needed to get some goals from different places and he's managed to get some in recent games which have been important for us," said Moyes of Pienaar. "I don't want it to become predictable about Pienaar and Baines down the left and I felt it was right we changed it and I think he can do a job for us there."