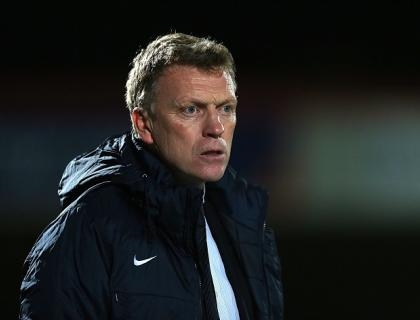 Vincente del Bosque got no goals from Michu but saw an accomplished defensive showing from Chico Flores as Swansea claimed a creditable goalless draw at Everton.

The Spain manager, at Goodison Park to run the rule over Swansea's quartet of Spaniards, saw two sides cancel each other out in a tight Barclays Premier League battle.

The in-form Michu went the closest of two hard-working sides to scoring when he forced Tim Howard to tip a shot onto the crossbar in the first half.

Everton had the better of the second period but Flores and partner Ashley Williams were solid and while Marouane Fellaini forced a late save from Michel Vorm, referee Phil Dowd had spotted an infringement.

Swansea went into the match buoyed by their brilliant Capital One Cup semi-final first leg win over Chelsea in midweek and maintained their recent momentum.

The Welsh side are now unbeaten in seven matches in all competitions and will be confident ahead of their FA Cup third-round replay with Arsenal.

It was another frustrating draw for Everton, who lost ground in their top four push but they once again proved they are a tough side to beat.

Everton were boosted by the presence of Leighton Baines, who overcame an ankle problem, while Swansea freshened up their side as Michel Vorm, Nathan Dyer, Dwight Tiendalli and Kemy Agustien came in.

Fellaini had the first chance of the game for Everton inside the opening minute but his 20-yard shot was easily claimed by Vorm.

Vorm then needed to be alert after a poor backpass from Ben Davies allowed Nikica Jelavic in but the goalkeeper blocked and then cleared as Victor Anichebe threatened.

Jelavic got behind the Swansea defence as Steven Pienaar clipped in an inviting cross but he failed to make firm contact and volleyed narrowly wide.

Swansea had their first serious opportunity when Pablo Hernandez launched a counter-attack but his ball inside for Nathan Dyer was too strong and Tim Howard gathered.

Hernandez, another of the four Swansea Spaniards hoping to impress De Bosque, Angel Rangel being the other, then attempted a spectacular shot from outside the area but screwed his effort well wide.

Anichebe went close when he reacted quickly after Fellaini headed on a Phil Jagielka ball but Vorm palmed away his header and Ashley Williams hacked off the line.

Michu was inches away from giving Swansea the lead as he raced onto a fine ball from Dyer and delicately attempted to chip Howard from close range. Howard backtracked and managed to palm the Spaniard's fine effort onto the bar.

Seamus Coleman responded for Everton by beating Agustien and Hernandez on the right and pulling back a low cross but Fellaini shot tamely at Vorm.

Baines flighted a free-kick into the Swansea area with his customary accuracy but Leon Osman, looking to mark the 10th anniversary of his debut with a goal, headed a glorious chance wide.

The Swans finished the first half strongly with Davies firing in a cross from the left but Sylvain Distin smashed behind for a corner as Dyer lurked behind him.

Everton made a positive start to the second period as Phil Neville took up an attack from Coleman and forced Vorm to save a low shot.

That yielded the first of three corners in quick succession for the Toffees. The first two came to little but Distin met Baines' cross from the third with a firm header but could not keep it on target.

Everton kept up the pressure with Fellaini winning a loose ball and Anichebe lifting the ball across the box but Jelavic failed to make contact with an attempted overhead kick.

The hosts appealed for a penalty when Jelavic went down in a challenge from Williams as the ball was lobbed in but referee Dowd was not interested.

Williams and Jelavic continued to argue over the incident but Dowd ignored the confrontation.

Jelavic set up Fellaini when he nodded the ball on inside the box but the Belgian was unable to get the ball from under his feet and Williams cleared.

The game became rather scrappy but Baines still offered quality and he presented Jagielka with a fine chance from a corner 16 minutes from time but the centre-back headed over.

Everton sent on Steven Naismith in a late attacking change but were unable to break through with Fellaini heading at Vorm but being penalised for a push and Jelavic shooting over.