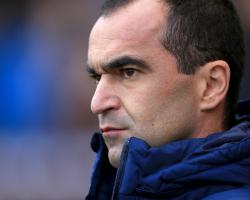 Everton 0-0 Swansea: Match Report - view commentary, squad, and statistics of the game as it happened.Swans secure point at GoodisonSwansea survived the late sending-off of Jonjo Shelvey to claim a well-earned Barclays Premier League point with a goalless draw at Everton.Former Liverpool midfielder Shelvey was dismissed for a second bookable offence 18 minutes from time after blocking the path of James McCarthy.But the hosts, who had lacked vigour throughout, failed to make the most of their numerical advantage as the Swans sat back to avoid defeat.They did have some late pressure but Steven Pienaar had a shot deflected wide and substitute Romelu Lukaku failed to connect with a cross in stoppage-time.But aside from a bright start by both teams, the game was largely a timid affair with Swansea perhaps squandering the best chance when Wilfried Bony shot wide early on.Everton did have some clear-cut chances but Lukasz Fabianksi did not have to make a significant save.They could have made a perfect start when Gareth Barry seized on a poor clearance by Angel Rangel to set up Samuel Eto'o but the veteran striker shot straight at Fabianski.Bony then spurned his gilt-edged chance in the fourth minute when he was played through by Gylfi Sigurdsson

Everton stood still expecting an offside flag that never came and they were relieved when Bony guided his low shot wide.The lively start continued as Ross Barkley had a shot blocked for a corner and both sides hand penalty shouts for handball in quick succession.Swansea were the first to be denied after Aiden McGeady gifted possession to Shelvey and his shot appeared to strike the outstretched hand of Antolin Alcarez.Shelvey protested but referee Kevin Friend gave nothing and his lingering frustration was evident when he was booked for kicking the ball away after conceding a foul soon after

But whatever his grievance, it was needless and something he would later come to regret.Everton then appealed for handball when McGeady had a fierce shot blocked but a corner was all they were given.Everton were forced to make a change 32 minutes after Alcaraz appeared to injure his shoulder in an aerial collision with Bony.The luckless Paraguayan, whose first season with the Toffees was ravaged by injuries, had been making only his fourth appearance of the campaign.Muhamed Besic took his place with Barry dropping back into defence.After that high-tempo opening, the first half petered out although Everton went close as both Eto'o and Steven Naismith failed to get a touch to a ball that ran across the area.Swansea had the first opportunity of the second half after Bony created an opening by beating Phil Jagielka with a neat turn but Shelvey dragged a shot wide

Sigurdsson also volleyed over.Everton struggled to create any momentum and it was not until just after the hour they were presented with another opportunity as a misplaced Ashley Williams header fell to Naismith

The Scot broke clear and checked back to find McGeady but his shot curled narrowly wide.Everton felt they were denied a good advantage when Friend halted play to book Sigurdsson after the Iceland international had held back Besic before he played what looked like a good through-ball.The Merseysiders finally began to look more like themselves and McCarthy looked to be advancing into a shooting position when Shelvey cynically stepped across to block him

He pleaded innocence but Friend deemed it a clear bookable offence and therefore had no option but to send him off.That should have given Everton the impetus they needed but Swansea acquitted themselves well and McCarthy was lucky to escape a booking after crudely hacking down Neil Taylor.Lukaku gave Everton a different target in the latter stages but Williams did his defensive duty to clear one dangerous Leighton Baines cross.Pienaar had an opening but saw a good effort deflected wide and Lukaku was agonisingly short of turning in a low cross with what would have been the last touch of the game