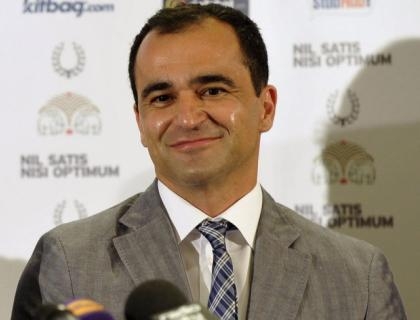 Marouane Fellaini went the closest to scoring as new Everton boss Roberto Martinez was kept waiting for his first win by dogged West Brom in a goalless draw.


The midfielder, subject of an approach from Manchester United this week, struck the post late on as Everton created the better chances of a tight Barclays Premier League contest at Goodison Park.


A Seamus Coleman cross-cum-shot also rattled the woodwork as the game entered injury time but the Baggies held on for a point in a lively finish.


Martinez will again feel frustrated after his side were held at Norwich in their season opener but there were plenty of encouraging signs for the Spaniard.


For West Brom, who also remain winless, there are more concerns with Steve Clarke's team looking toothless in the absence of striker Nicolas Anelka, who is on indefinite compassionate leave.


Everton always looked confident and only their lack of a killer touch in front of goal let them down.


The hosts pieced together their first promising move after six minutes when Steven Pienaar got a header on target from a Kevin Mirallas cross, although Ben Foster's save looked over-flamboyant.


Pienaar tested Foster again with a low shot from outside the area soon after and Ross Barkley, confidence no doubt swelled after last week's fine performance and goal against Norwich, drove across goal.


It took 25 minutes for West Brom to create a chance but Youssouf Mulumbu curled well wide from a Graham Dorrans cut-back.


Everton threatened again from a free-kick but Mirallas blasted into the wall and Barkley blazed well over.


Mirallas showed great skill to take a touch and then shoot from the edge of the area after a good run by Coleman but Foster tipped over.


The game became niggly as both sides felt they were harshly penalised for fouls by referee Roger East, who began to attract the ire of supporters.


The visitors had another chance when James Morrison shot wide but they finished the first half on the back foot, scrambling clear again after a Nikica Jelavic header.


Everton began the second half determined to make their superiority count but Jelavic was unable to turn in a low cross from Leighton Baines, who was also subject of a failed bid by United this week.


West Brom breathed again when Coleman drove a similarly dangerous ball through the area from the opposite side.


Barkley stuck a sweet left-foot shot from the edge of the area but Foster saved low to his right and Fellaini miscued the rebound.


Everton maintained the tempo with Mirallas shooting straight at Foster after turning inside the area.


The hosts began to grow frustrated and were almost caught out on the counter-attack when Morrison connected well from distance but Tim Howard made his first significant save.


Everton almost paid the price for some sloppiness 15 minutes from time when substitute Steven Naismith was robbed by Morrison, who quickly set up Long, but again Howard saved well.


West Brom boss Steve Clarke was forced to change his goalkeeper 12 minutes from time as Foster limped off.


Luke Daniels took his place and was beaten all ends up as Fellaini brilliantly took a Phil Jagielka cross on his chest and dabbed past, only for the ball to rebound off the post.


Arouna Kone, sent on to add fresh impetus to the Everton attack, almost stole in as West Brom struggled to clear but Daniels recovered to smother his attempt.


West Brom had a scare with 90 minutes on the clock when Coleman's cross dipped over Daniels and struck the bar, while Everton also appealed unsuccessfully for a penalty after a Barkley shot struck Billy Jones.