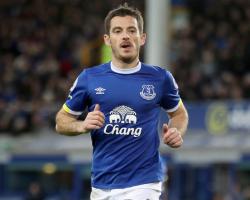 Mane strikes at the death to earn Liverpool derby spoils

Striker Daniel Sturridge came off the bench to play a pivotal part in Liverpool snatching a winner in the fifth minute of added time of the 227th Merseyside derby.

The England international, making his first appearance since November 19, was a late introduction off the bench and it was his crossfield run and shot against a post which presented Sadio Mane with a tap in.

Sturridge has been sidelined with a calf injury, but having been included in the match-day squad for the first time he proved his match-winning capabilities again with the incisiveness which had been so lacking for long periods.

It ensured Liverpool closed the gap to Premier League leaders Chelsea back to six points and also extended Everton's woeful run in this encounter to just one win in the last 20 league meetings.

The hosts were by far the better side for 45 minutes, but for all their possession and control lacked a cutting edge.

An out-of-sorts Liverpool found their game after the break, but it seemed they too would be frustrated until Sturridge and Mane's late intervention deep into eight minutes of added time, mainly as a result of an injury to Everton goalkeeper Maarten Stekelenburg.

The Toffees began as they had finished against Arsenal, all high-tempo and aggression, and took control of the game against a side who are usually the ones doing the pressing.

However, for all their possession the Toffees failed to force a save from Simon Mignolet, with the excellent Ragnar Klavan sticking out a timely foot to deny Romelu Lukaku six yards out.

Ramiro Funes Mori wasted their only other half-chance by directing a free header off target, while Liverpool's solitary opportunity saw Divock Origi, who had scored five in five, bundling wide from a Nathaniel Clyne cross.

Gareth Barry replaced the injured James McCarthy at the break and that, coupled no doubt with a half-time wake-up call from Klopp, saw the visitors gain a foothold.

It did not improve their sharpness, however, with Roberto Firmino shooting straight at Stekelenburg when clean through.

Lukaku's looping header wide aside, chances were still thin on the ground, but the loss of Stekelenburg to injury was a further blow to Everton, who were lucky to keep Ross Barkley on the pitch after a late above-the-ankle challenge on Jordan Henderson.

Replacement goalkeeper Joel Robles denied Firmino's volley, but he was beaten at the death by the combination of his left-hand post and Mane's predatory anticipation.