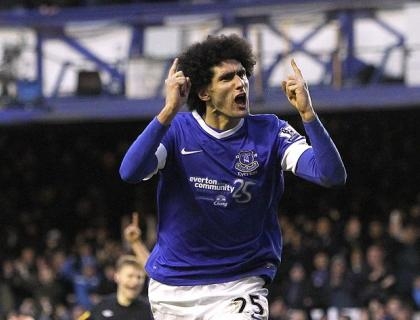 Latics off to Wembley

Wigan made history by reaching an FA Cup semi-final for the first time after three goals in a devastating four-minute spell saw them beat an abject Everton 3-0 at Goodison Park.

Maynor Figueroa, Callum McManaman and Jordi Gomez scored within just 202 seconds of each other in the first half to demolish last year's semi-finalists hope of a return to Wembley.

Strangely for Everton they failed to produce anything like the expected response and exited the cup with a whimper - much to the disgust of an angry home crowd.

Somewhat oddly for this stage of competition the FA Cup is not something either manager had considered a priority.

Toffees boss David Moyes said he would rather secure Champions League football than a place in the final while Roberto Martinez insisted he would not allow the FA Cup to deflect attention from their fight for Premier League survival.

Now the Spaniard, who has fielded weakened teams in cup competitions throughout his reign at the DW Stadium, has to seriously consider the best way forward.

There are also plenty of questions for Moyes, who will mark his 11th anniversary at the club next week still not having won silverware.

With his contract up at the end of the season and a top-four finish by no means guaranteed the Scot has a significant personal decision to make.

Of more pressing concern, considering he values Champions League football so highly, is how Wigan - who had beaten only two of their last 10 top-flight opponents in the FA Cup since 1987 - and are battling relegation could score - and win - so easily.

Everton had created the first chance with Sylvain Distin heading wide but from then it was almost one-way traffic as Shaun Maloney, who caused the hosts numerous problems with his movement in from the left, curled a shot past Jan Mucha but back off the post.

The hosts' only other real chance of the first half fell to Nikica Jelavic, without a goal in two months, but his low effort was palmed away by Joel Robles.

Then the madness began as Wigan incredibly put the game beyond their opponents in the space of less than four minutes.

Mucha, making his FA Cup debut and only his ninth appearance in two and a half years at the club with Tim Howard sidelined by broken bones in his back, passed his first real test by turning James McCarthy's shot behind.

However, from Gomez's 31st-minute corner the Slovakian got himself in a tangle inside the six-yard box and Figueroa powered home a far-post header.

If Everton looked stunned by that what followed in barely a matter of seconds left them staggered and virtually out for the count.

Huyton-born McManaman, released by Everton as a 16-year-old, outsprinted Distin to expertly clip a shot past Mucha.

The 21-year-old would probably have preferred to have scored at the Gwladys Street end, where he used to stand as a young season ticket holder, but a goal at Goodison Park was still special.

His family, all Scousers but among the away fans, must have not known where to put themselves.

But while they were all still celebrating that goal Wigan made it 3-0 as Gomez fired home from 20 yards.

The goal was greeted by loud boos from the majority of the crowd, who having been told Wigan would field a weakened side - they made four changes to the team which were thrashed 4-0 at home by Liverpool last weekend - saw their own dreams of a Wembley return collapsing in front of their eyes.

McManaman would have been desperately disappointed to be forced off by injury after a clash with Leighton Baines but he departed six minutes from the interval to be replaced by Ryo Miyaichi.

The change did little to affect the visitors' momentum though and Mucha had to be at full-stretch to tip over Maloney's curling, dipping free-kick.

It is safe to assume the Everton dressing room would not have been a pleasant place during half-time with Moyes most certainly unhappy with the lack of fight his side had shown.

Phil Neville was removed to allow Victor Anichebe to partner Jelavic up front but it was the previously quiet Marouane Fellaini who was first to show, volleying wide early in the second half.

Although the performance improved the hosts rarely threatened and when substitute Ross Barkley blazed wide late on it ended any fanciful hopes of a dramatic comeback.