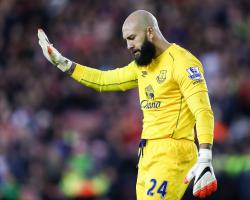 Barnes see red as Burnley stumbleMidfielder Ashley Barnes' recklessness cost Burnley the chance of salvaging a point at Everton as the struggling Clarets dropped to the bottom of the Premier League.Barnes may have controversially avoided punishment for a wild tackle on Chelsea's Nemanja Matic back in February but there was no escape as two ill-advised challenges - one which did not even connect with an opponent - saw him sent off in first-half added time at Goodison Park.Burnley were already trailing to Kevin Mirallas's goal and with 10 men they could not claw back that deficit, losing 1-0.Manager Sean Dyche previously defended the 24-year-old after Jose Mourinho described the studs-up lunge at Matic as "criminal" but the way the player threw himself about the Goodison Park pitch in the opening 45 minutes was not indicative of someone displaying good judgement or the necessary control.Burnley's manager and players complained about Barnes's first booking for a wild swipe at James McCarthy as the Republic of Ireland midfielder raced away from him midway through the half but referee Mike Jones, who allowed play to continue before returning to show a yellow card, was in no doubt about the intent.So when Barnes slid into Seamus Coleman just seconds before the break the official had no option but to issue another yellow card followed by a red, meaning he misses next week's crucial encounter at home to Leicester whose victory over Swansea dropped the Clarets to the foot of the table.That Mirallas appeared fortunate to receive only a booking for a studs-up challenge on George Boyd early in the second half only increased Dyche's frustration, already unhappy that Ross Barkley's penalty saved by Tom Heaton with the score at 0-0 had come from a David Jones tackle just outside the area.Mirallas' goal and Barnes' red card ensured that incident was only a minor talking point as Everton once again, and somewhat unfathomably, opted to ignore the qualities of Leighton Baines, scorer of 15 from 16 from the spot.That first happened in January when Mirallas stepped up in front of the England defender against West Brom but failed, after which manager Roberto Martinez clarified his left-back was the confirmed taker only for striker Romelu Lukaku - who returned from a month out with a hamstring injury as a second-half substitute - to score the next three.Why Baines has been removed from penalty duties remains mystifying but Mirallas at least spared Barkley's embarrassment by converting his own mis-kick at the second attempt in the 29th minute from McCarthy's cross.Jones immediately wastefully fired over with only Tim Howard to beat before midfielder Gareth Barry tracked back behind his defenders to block a shot from Barnes, who later wanted a penalty when his cross hit the arm of John Stones.After the break Arouna Kone's near-post shot from a Baines cross was saved by Heaton, who was then fouled as the ball broke loose, McCarthy side-footed wide and Baines' drive was parried by the Burnley goalkeeper as Everton failed to make their numerical advantage count.Burnley's problems -self-inflicted ones aside - are plain for all to see

They have won just twice in 35 away matches in their two seasons in the Premier League and have not scored in six hours and 29 minutes in the current campaign.Danny Ings, who has now not scored in eight league matches, headed over their best chance of an equaliser with five minutes to go.However, they remain only two points from safety, although 17th-placed Hull have a match in hand and a superior goal difference meaning next week's visit of Leicester falls into the "must-win" category.Everton have no such problems as 13 points from the last 15 - equalling a season's best five matches unbeaten having not lost at home in 2015 - has them comfortably mid-table.Their biggest issue is finding the motivation not to coast towards the end of a disappointing season