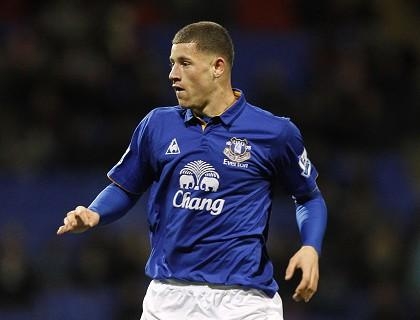 Jose Mourinho suffered his first defeat in his second coming as Chelsea manager as birthday boy Steven Naismith celebrated his first league start of the season in perfect fashion.


The Scotland international, who scored in the 2-1 defeat at Stamford Bridge on the final day of the season when he was last in a Premier League starting line-up, headed home the winner in first-half added time.


His goal also kick-started the Roberto Martinez era at Goodison Park after three successive draws had left the Spaniard with some convincing still to do.


Chelsea have hardly been pulling up trees like they did in Mourinho's first spell in charge in 2004.


Back then he began with four successive wins and did not taste defeat until his ninth outing in the league.


This time around it appears he is not so special with two victories, a draw and now this defeat.


The much-anticipated Premier League debut of Chelsea striker Samuel Eto'o did not go to plan for the 32-year-old, who was outshone by Gareth Barry making his first appearance for the Toffees after his deadline-day loan move from Manchester City.


His class is not in doubt but the former Barcelona and Inter Milan forward may be a bit rusty after a money-spinning spell in Russia with Anzhi Makhachkala.


It certainly looked that way when he headed wide Ramires' cross after five minutes when he should have - at the very least - hit the target.


More embarrassingly the Cameroonian then ballooned a long-range shot into the upper tier of the Gwladys Street end.


But Everton offered precious little up front themselves, with Nikica Jelavic's weak header and Naismith's cross-shot palmed away by Petr Cech at the near post all they could muster in the opening half-hour as midfielder Ross Barkley began brightly but faded quickly.


And Martinez's preference for them to play out from the back almost cost them a goal when goalkeeper Tim Howard tried to pass square from his six-yard box.


He found only Schurrle, who cut back for Eto'o to shoot into an open goal but as the striker eyed his first goal in English football, Barry slid in with perfect timing to deflect the ball behind.


The England international, out of favour at City, brings a wealth of experience greater and different to that of his fellow 32-year-old, midfield partner Leon Osman.


And it may have been his first outing with his new team-mates but Barry's positioning, reading of the game and general calmness under pressure gives the Toffees a first-rate shield in front of the back four.


Chelsea cranked up the pressure in the 15 minutes before the break with Howard saving Ramires' shot from an Eto'o pass, Schurrle firing over after Ramires' run and Branislav Ivanovic heading over Juan Mata's free-kick.


But with 30 seconds of one added minute remaining Osman crossed to the far post where Jelavic managed to keep the ball alive and Naismith, who had previously fired wastefully wide from Kevin Mirallas' shot, bundled home a header from close range.


Chelsea's tempo went up another notch after the interval and within 60 seconds of the restart Ramires played in Schurrle, who clipped over Howard but into the side-netting.


Martinez brought on B#13million signing from Wigan James McCarthy to shore up the midfield at the expense of Jelavic with 25 minutes to go but Chelsea continued to threaten, with Ramires deflecting an Ivanovic cross into the side-netting.


Chelsea seemed to lose their way as Everton grew in confidence in the closing stages and David Luiz was booked for pulling down Mirallas as the Belgium international threatened to break clear on the halfway line.


Naismith departed to a standing ovation and took his seat in the dug-out to watch Leighton Baines clip the angle of post and crossbar with a 90th-minute free-kick.