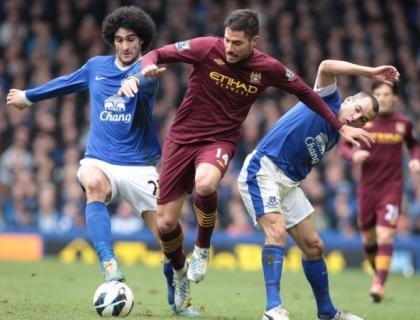 Steven Pienaar scored the only goal as Everton's bid for European football received a timely boost thanks to a submissive Fulham side and rivals Tottenham being held to a draw at Wigan.

Pienaar pounced early in a first half notable only for the lack of effort put in by the visitors, who with mid-table safety assured rarely looked interested.

The match struggled to rise above mediocrity for long periods but that will not have bothered Toffees boss David Moyes who, after last week's loss at Sunderland, will be urging on his squad for one final push.

Everton began the day six points off fourth-placed Chelsea and although they closed that to three the Stamford Bridge side have a match in hand.

Significantly, however, fifth-placed Spurs drew at Wigan meaning their cushion over the Merseysiders is now only three points.

Fulham had lost their previous 19 league visits to Goodison Park and the way they played the first half suggested they knew it was a fruitless exercise.

Their travelling support certainly thought so as only a couple of hundred made the trip north.

Marouane Fellaini's early header was saved by goalkeeper Mark Schwarzer before they took a 16th-minute leader, having assumed control of the game without so much as a word of objection from the visitors.

The Toffees had enjoyed plenty of penetration down the right and it was no surprise when Kevin Mirallas and Leon Osman combined to play in Seamus Coleman close to the byline for him to cut the ball back to the penalty spot where Pienaar ran in unchallenged to side-foot home.

Since his return to the club from Tottenham the South African has scored 10 goals in 46 league matches, having managed nine in 104 during his first spell.

The 31-year-old's contribution this season to 11 league goals - six for himself and five assists - is also his best top-flight return.

Victor Anichebe looped a long-range header wide as the Cottagers showed about as much intent as the empty crisp packet which blew across the pitch midway through the half.

The unkind observer would have said Dimitar Berbatov's exit on the half-hour suggested he had seen enough but in fairness his replacement by Mladen Petric was most likely due to injury.

In between those Jelavic, a shadow of his prolific self of 12 months ago, could not decide whether to shoot or cross to Anichebe having been sent clear by Coleman and ultimately screwed the ball across goal and embarrassingly out for a throw-in.

Fulham's first chance came just before the break when Kieran Richardson's cross rolled just out of the reach of Petric at the far post.

They improved in the second half, although it would have been a surprise if they had not, but Urby Emanuelson should have hit the target from Alex Kacaniklic's cross 10 minutes after the interval.

Mirallas' tumble in the area had the Belgium international appealing for a penalty but despite contact from Stanislav Manolev the Everton forward was already falling over.

The Belgian's next intervention was brilliant, however, flicking it over Manolev before hitting a volley which Schwarzer palmed away.

Anichebe then looped a header just wide of the far post as Everton finally regained the dominance they had enjoyed in the first half.

Fellaini would have wrapped up victory five minutes from time but somehow bundled over Leighton Baines' cross from close range while substitute Ross Barkley forced a good save from Schwarzer when put clean through in added time.