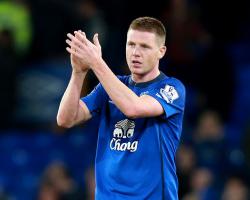 Everton 1-1 Hull: Match Report - view commentary, squad, and statistics of the game as it happened.Tigers end poor runHull's run of defeats came to an end as an equaliser from substitute Sone Aluko secured them a 1-1 draw at Everton.The Toffees appeared very much in control at half-time of the Barclays Premier League contest, going in a goal up thanks to Romelu Lukaku's 34th-minute strike from a Kevin Mirallas cut-back.But Hull battled back after the break and were level in the 59th minute when Aluko, only just introduced to the action, got past Sylvain Distin and put a nice finish past Tim Howard at his near post.The Tigers' ex-Everton frontman Nikica Jelavic headed just wide moments later, and the visitors then hung on doggedly for a draw that takes them out of the relegation zone, which they had slipped into on Tuesday night.Steve Bruce's men are only up a place from 18th to 17th and are clear of the drop zone on goal difference alone, but they will surely take a considerable boost from getting this point on the board after losing their previous four games.Meanwhile, Roberto Martinez's Everton, having failed to really spark, stay 11th, with the gap between them and fourth place now cut by one to seven points.Martinez's only change from the 2-1 loss at Tottenham on Sunday - which had ended an eight-game unbeaten streak for the Merseysiders - saw Leon Osman replace Samuel Eto'o.Bruce made four adjustments, who dropped Hatem Ben Arfa from the squad completely after substituting him in the first half of Saturday's 3-0 reverse at Manchester United.Stephen Quinn came in for Ben Arfa, with the other incoming personnel being Liam Rosenior, David Meyler and Tom Huddlestone

Following a subdued start to the game on a chilly night, Lukaku fashioned the first real attempt on goal just prior to the quarter-hour mark, turning and cracking a low effort from outside the box which Allan McGregor gathered.As Everton looked to create further opportunities, Lukaku received Gareth Barry's pass in the area and prodded goalwards, seeing his shot hit Rosenior and referee Robert Madley dismiss his claims it had been a handball.Tigers captain Michael Dawson was booked for upending Mirallas, who could only send the resulting free-kick into the arms of McGregor from a decent-looking position, before Jelavic completely miscued a header inside the opposite box.Despite being increasingly on top, Everton were still yet to really show a cutting edge, but when Mirallas lashed the ball across the box in the 33rd minute, a flick from Osman brought a diving save out of McGregor.And moments later, the deadlock was broken as Belgium internationals Mirallas and Lukaku combined for a goal once again, as they had done twice last week when they each scored against Wolfsburg in the Europa League

Luakaku nodded the ball on for Mirallas, who surged down the right, got the better of Dawson and provided the delivery from which his compatriot rifled home

It was a seventh goal of the season for Lukaku - Everton's B#28million club record summer signing - and his third in his last four games.The hosts' efforts towards a second goal before the interval saw Muhamed Besic curl a shot wide and skipper Phil Jagielka miss with a header from a corner

Hull's Mohamed Diame had a shot blocked shortly after the restart - but Everton were soon threatening again, this time Lukaku teeing up Mirallas, who tried a cheeky chip that just cleared the bar

Diame came off for Aluko, while Leighton Baines had to disappear down the tunnel briefly for treatment on what looked like a bloodied nose

Besic then looped a shot to McGregor, before Lukaku skewed off-target.Hull were level when Aluko - six minutes after his introduction - danced past Distin and beat Howard for his first goal since September 2013.Soon after, Everton fans had their hearts in their mouths as Jelavic directed a header narrowly wide.Martinez reacted by taking off Mirallas for Steven Pienaar and then Besic for Aiden McGeady - but Everton struggled to show any incisiveness as Hull dug in.Dawson blocking a shot from Lukaku in the box was the closest they came to retaking the lead, with the hosts continuing to be frustrated thereafter and eventually departing the field to boos from some Toffees supporters, who have now seen their team win only three of their last 10 home league matches