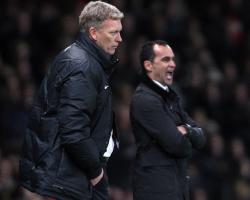 Moyes in rotten return to GoodisonEverton struck a fatal blow to Manchester United's Champions League hopes as David Moyes endured a hellish return to Goodison Park.Leighton Baines and Kevin Mirallas were on target to give Roberto Martinez's side an easy 2-0 win.Moyes' picture takes pride of place alongside the likes of Dixie Dean and Alan Ball on an Everton timeline that stretches around Goodison Park.But the Everton fans made it clear that they no longer hold their former manager in the same esteem.Moyes, who was in charge at the Merseyside club for 11 years, was mocked throughout this incredibly one-sided encounter.One home fan even turned up dressed as the Grim Reaper to poke fun at the Scot from just behind his seat in the away dugout.The Reaper, and his inflatable scythe, was ejected from the stadium with 15 minutes on the clock, but he must have known by then that his team would emerge with the three points.United, quite simply, never looked like taking anything from the match.John Stones and Sylvain Distin kept Wayne Rooney quiet, and United were out-muscled and out-classed in midfield while Tim Howard was called into action on two occasions.Phil Jones gifted Everton the lead when he handballed Romelu Lukaku's shot and Baines - who was the subject of what Everton called an "insulting and derisory" B#12million bid last summer - scored from 12 yards.The sloppy Alex Buttner played Mirallas onside for the second just before half-time and he beat David de Gea from a tight angle.The result and performance from both teams showed just how far United have regressed and how much Everton have come on under Roberto Martinez.For United, Champions League qualification is now mathematically impossible

For Everton, their dreams of dining at Europe's top table are very much alive and few would back against them based on this performance.Martinez's men are now just one point behind fourth-placed Arsenal with three games left

The run-in looks to be an exciting and potentially-successful one for both the red and blue sides of Merseyside.As expected, Moyes emerged from the tunnel to a loud chorus of boos from the home fans.He stood on the touchline, seemingly unaffected by the negative reaction from the fans who cheered him on for 11 years.The Grim Reaper first took to his feet and waved his inflatable scythe in Moyes' direction after five minutes, much to the amusement of those around him.Moyes was seemingly unaware that one of the four men of the apocalypse had turned up to taunt him.On the pitch it was Everton who were taunting their opponents

They dominated possession and United could only chase shadows as Everton flicked the ball across the well-manicured turf with ease.Rooney, his every touch booed, dropped too deep, as did Juan Mata, leaving United without a target man up top.Everton had no such problem

Lukaku raced at the United defence like a freight train, bruising a shell-shocked Jones and Jonny Evans, who looked off the pace after a two-month absence.Just after the Reaper was ejected, Everton had their first real chance

Mark Clattenburg waved away appeals for a penalty.Moments later the referee had no choice but to point to the spot when Jones inexplicably stuck out his right arm to stop Lukaku's shot.Baines, who could have easily been wearing red today, blasted the ball down the middle inches away from De Gea's out-stretched leg.Everton were playing some beautiful football

Coleman, Mirallas and Steven Naismith played the ball in a tight triangle, but Lukaku could not finish off the move.The seemingly inevitable second came just before the break when the excellent Coleman played in Mirallas, who beat De Gea from close range.United appealed for offside against Mirallas, but replays showed Buttner had played the Belgian on.Howard was finally called into action in first-half injury-time when Evans headed into the American's hands.Rooney had a much better chance after the restart, but he dallied, allowing substitute Antolin Alcaraz to come to the rescue.Moyes brought on Antonio Valencia, Javier Hernandez, and later Danny Welbeck but nothing changed on the pitch, as Everton remained in control.Tempers then flared when James McCarthy saw yellow for a rash challenge on Mata and Rooney reacted with a late two-footed tackle on the Irishman.Naismith wasted two good chances to make it 3-0 while Howard denied Rooney a goal at the other end.There was no way through and Moyes endured taunts of "sacked in the morning" shortly before he disappeared down the tunnel at the final whistle