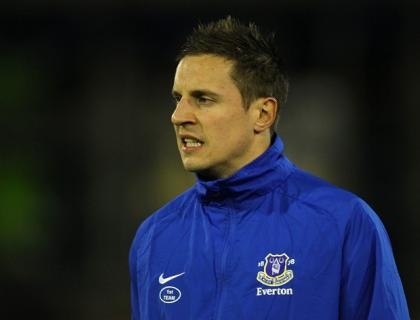 If their display at Goodison Park is anything to go by then QPR's return to the npower Championship appears a mere formality as a performance lacking in attitude, endeavour and invention got its just desserts with a 2-0 defeat to Everton.

A deflected strike from Darron Gibson - Everton's 50th goal in the Premier League this season - and a smart finish from Victor Anichebe five minutes either side of half-time secured a victory the hosts were just not made to work hard enough for.

With five matches remaining the Londoners are seven points from safety and they simply have to win their next two games against Stoke and Reading - the clubs closest to them in their remaining fixtures - to even stand a chance of surviving.

But it will take performances significantly improved from this one as they failed to put up a fight against the European football-chasing Toffees, who were themselves far from at their best.

QPR's future looked bleak even before kick-off with just two wins in their last 11 matches but what made their performance strange was that, despite their obvious predicament, there appeared no real heart for the battle within the team.

That will be a concern for manager Harry Redknapp whose apparent ability to applying the magic touch appears to have deserted him.

Junior Hoilett's curling effort in the fourth minute after Andros Townsend's 40-yard run at the centre of the defence was bettered in the first half only by Loic Remy's powerful effort which Tim Howard parried for a corner.

Everton were also not their usual busy selves, although the tempo of the match may have changed had referee Lee Mason felt Clint Hill's challenge on Seamus Coleman warranted a penalty.

He did not and it was to the hosts' detriment as they toiled for 40 minutes without really opening up a side second-bottom of the table.

Anichebe was inches away from connecting with Leighton Baines' cross while Phil Jagielka failed to get his head onto the England left-back's inswinging corner.

Baines, who prior to this match had created more chances for his team-mates than any other player in Europe's top five leagues, again provided an opportunity when he cut back a right-sided free-kick to Gibson outside the box.

The Republic of Ireland international rolled a pass intended for Marouane Fellaini, Everton's top scorer returning after suspension, only for Sylvain Distin to get there first but bundle his shot hopelessly wide from eight yards out.

When the home side eventually took the lead it was through a stroke of luck as Gibson's long-range strike took a significant deflection off Hill to leave goalkeeper Julio Cesar helpless.

If Redknapp expected a response from his players after the break he would have been disappointed as it was Everton who came out more determined.

Anichebe's close-range shot rebounded off the post and along the goalline where Jose Bosingwa managed to clear despite his awkward position before Distin had a header palmed away by Cesar and Jagielka a shot blocked by crowd of bodies.

But with not the slightest attacking intent or invention visible it was no surprise when QPR conceded again.

The introduction of the mercurial Adel Taarabt injected some life into the visitors lacklustre approach but even then they tested Howard just once in the final half-hour when full-back Nedum Onuoha forced the American into a save.

Everton, almost unnoticed, have crept to within three points of Champions League qualification.

Manager David Moyes, who would be happy to secure any European football, has played down their chances but with a trip to the Emirates Stadium to face Arsenal on Tuesday they can put themselves firmly back in the race.