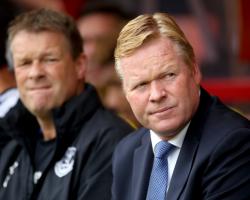 Everton returned to winning ways as goals from Romelu Lukaku and Ross Barkley secured them a 2-0 victory over West Ham at Goodison Park.

Lukaku kept up his remarkable scoring run against the Hammers by heading the Toffees in front in the 50th minute, getting on the end of Yannick Bolasie's cross after Adrian parried a Seamus Coleman strike.

The Belgium striker has a goal a game in appearances for Everton against West Ham - a run that which has now extended to nine matches.

Lukaku then combined with Barkley in the 76th minute, with the latter firing in at the far post to wrap up a first win in five Premier League games for sixth-placed Everton.

West Ham, who had been looking to end a week marred by Wednesday's crowd trouble at the London Stadium on a high, remain 16th.

With their star man Dimitri Payet to the fore, the away side made a decent start to the contest.

The France international produced tidy tee-ups for Michail Antonio and Pedro Obiang that both went unconverted, then brought a save out of Joel Robles - making his first appearance of the season, in for the injured Maarten Stekelenburg - with a deflected shot.

Everton's first real show of threat came just after the quarter-hour mark when Bolasie's strike was blocked by Mark Noble's arm and Gareth Barry curled the loose ball over.

Lukaku was then let down by a poor touch in front of Adrian's goal, and Manuel Lanzini skipped through a clutch of players at the other end only to flash the ball harmlessly across the box.

Lukaku had a shot divert wide off a West Ham man after being fed by Barkley, who moments later neatly sidestepped Winston Reid and unleashed a deflected effort of his own that Adrian did very well to save.

The lively Barkley saw another strike deflect over, and an apparent cross from Kevin Mirallas that headed goalwards was tipped over by Adrian as Everton's improvement continued - although they were grateful that Coleman got in the way of a Payet attempt just before half-time.

It was then an important attacking contribution from Coleman that led to Everton going ahead shortly after the break.

Adrian could not hold on to the Republic of Ireland international's low drive and Bolasie did well to react quickly and provide the delivery that Lukaku nodded in from close range.

Barkley shot off-target shortly afterwards, before the visitors exerted some considerable pressure as they looked for an equaliser.

Antonio got past Ashley Williams but was thwarted by Robles, and after good work from Bryan Oviedo ensured an effort from West Ham substitute Andre Ayew went wide, the Toffees goalkeeper dived to push away a curler from Noble in fine fashion.

Having survived that pressure unscathed, Everton then effectively settled the contest when Barkley sprayed the ball out wide to Lukaku and went on to meet the frontman's return cross with a strike past Adrian.

Lukaku had the chance to add to his goal late on but saw his side-foot volley saved.