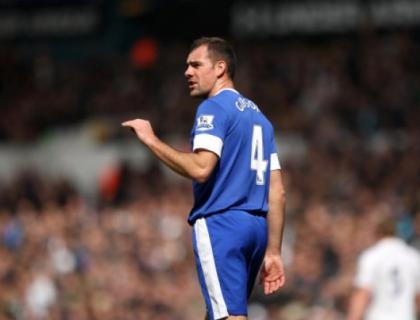 Substitute Steven Pienaar produced a stunning comeback after six weeks on the sidelines as he scored with his first touch to get Everton back to winning ways.


The South African, whose last appearance before a hamstring injury was on August 31, brilliantly converted Kevin Mirallas' cross within 30 seconds of coming off the bench.


His goal proved the decider in a 2-1 win at home to Hull in which Mirallas had seen his early strike cancelled out by Yannick Sagbo.


Pienaar's return is more than timely after the loss of fellow midfielder Darron Gibson to an anterior cruciate ligament rupture this week.


His attacking combination down the left with Leighton Baines has become something of a trademark and while they have coped admirably in his absence, his comeback gives manager Roberto Martinez yet another attacking outlet.


Pienaar's intervention was particularly welcome for Everton, as having lost the only remaining unbeaten league record at Manchester City prior to the international break they appeared in danger of throwing away their early advantage.


Mirallas put them ahead in the eighth minute but Hull could have a valid argument for it being disallowed.


At first glance it seemed Allan McGregor appeared to leave the Belgium international's low shot just before it cannoned in off the inside of his right-hand post.


However, replays showed Gareth Barry was running back from an offside position and even tried to backheel the ball as it went past him and so the Hull goalkeeper could be given the benefit of the doubt.


It was the first Premier League goal at the Gwladys Street End since Mirallas scored against West Ham on May 12 and the first Hull had conceded in 232 minutes of league football.


If Hull were a touch unfortunate with the goal their luck worsened in the 15th minute when they lost Danny Graham, still desperately seeking his first goal for the club, to injury.


The 28-year-old, on loan from Sunderland - for whom he has also not scored - was caught by a high tackle from Barry and departed on a stretcher to be replaced by Sagbo.


Strangely his loss appeared to galvanise the Tigers and centre-back Abdoulaye Faye twice failed to capitalise on good headed chances from corners, the second after Sylvain Distin's overhit knee-high backpass was sliced into the Park End by Tim Howard


Having escaped sanction earlier Barry was booked for going over the top in a challenge with Sone Aluko, and despite having just clipped the top of the ball other referees may not have been as lenient as Neil Swarbrick.


Aluko showed no ill-effects, however, as he returned to the action to immediately setting up the equaliser having beaten Baines to the byline to cross for Sagbo to convert first-time at the near post.


Having struggled to get into the game in the opening half-hour midfielder Ross Barkley began to find some space and time on the ball in the closing stages of the half.


Mirallas continued to be Everton's best attacking outlet after the break though and it was he who provided the pin-point cross to set up Pienaar's goal.


The South African, who had missed four league matches with a hamstring problem, deserves huge credit for the quality of the finish though as he brilliantly steered home left-footed.


Sagbo somehow escaped without even a booking after a foot-up challenge on Phil Jagielka as Hull's competitiveness occasionally stretched the boundaries.


The fight should have been knocked out of them in the 76th minute when Arouna Kone, on for a subdued Romelu Lukaku, did brilliantly in dropping his shoulder to wrongfoot Faye but with just McGregor to beat from close range he somehow managed to crash his shot against the post.


Fortunately for the Ivory Coast international his miss-of-the-season contender did not prove costly as Hull ran out of steam - seeing their four-match unbeaten run ended - as Everton moved up into fifth place in the table.