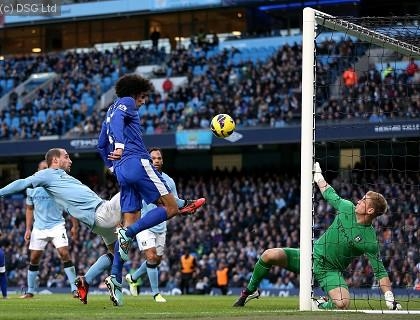 Everton scored twice in the last couple of minutes to snatch a well-deserved 2-1 victory over a Tottenham side who looked to have escaped the Goodison Park fortress with all three points.

However, Steven Pienaar headed an 90th-minute equaliser and Nikica Jelavic turned home the winner in added time to extend their unbeaten home league record to 12 matches.

Had they not got at least a point it is certain Moyes would have been complaining about a penalty claim which did not go their way late in the first half when Pienaar's shot hit the arm of William Gallas.

Everton have been on the end of some rough decisions in recent weeks and Moyes, most pre-emptively, made a point of highlighting that in his programme notes.

"We've had decisions which have cost us points....on a regular basis at the moment decisions (are) being made by officials are affecting the outcome of games," he wrote.

"I will continue to try to support the Professional Game Match Officials but they must work to improve their standards throughout the game."

Fortunately for him he did not have reason to complain as much after team's late turnaround ended a dismal sequence of seven draws in nine Barclays Premier League matches.

With the injured Gareth Bale out of the team Tottenham did not have the same attacking thrust down their left as Dempsey was in no way a like-for-like replacement.

As a result Everton were able to take advantage, particularly in the first half, by pouring forward down their right side.

It also gave midfielder Darron Gibson the opportunity to display his extended range of passing as full-back Seamus Coleman exploited plenty of space created by Kevin Mirallas, back after four matches out with a hamstring injury.

He was able to get to the byline with alarming regularity as far as Spurs were concerned but they would have been thankful no real chances came from it.

Leon Osman and Steven Pienaar both missed Nikica Jelavic's cut-back from the left with the Croatia striker himself denied by Gallas after Mirallas broke down the right.

Coleman fired into the side-netting, Marouane Fellaini headed over a corner and Osman clipped left-footed cross-shot wide from Fellaini lay-off as Everton dominated without threatening.

Shouts for a penalty against Dempsey after the ball came off his chest were magnified greatly when Pienaar's shot hit Gallas' arm but referee Kevin Friend was not interested.

Everton had to replace Mirallas with Steven Naismith at half-time after the Belgium international aggravated the hamstring injury which had sidelined him for a month.

And the Scot should have made an immediate impact but when Leighton Baines' shot from a free-kick rebound flew into the penalty both Jelavic and Naismith failed to get the decisive touch which would have brought the opening goal.

It took until the 54th minute for Spurs to properly test Everton goalkeeper Tim Howard with Jan Vertonghen's swerving shot tipped over by the United States international.

Osman's side-foot drive from Baines' cut-back sailed just over the crossbar before the England international also drew a low save out of Hugo Lloris.

Having soaked up so much pressure it was almost inevitable the visitors would produce a sucker-punch and it duly arrived in the 76th minute.

Dempsey received the ball with his back to goal 30 yards out, turned and hit a shot which took a slight-enough deflection of Sylvain Distin to send it dipping over Howard.

Substitute Gylfi Sigurdsson hit the crossbar with a curling shot as gaps opened up as Everton pressed for the equaliser they at the very least deserved.

It duly came in the last minute when Coleman crossed and Pienaar headed past Lloris.

But there was further late drama as Gibson's pass was touched on by substitute Apostolos Vellios and Jelavic struck to the delight of Moyes, whose exuberant celebrations saw him encroach onto the pitch.