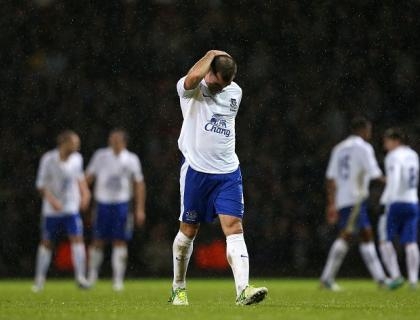 Leon Osman and Phil Jagielka struck as Everton maintained their Champions League challenge with a 2-1 win over an enterprising but luckless Wigan at rain-sodden Goodison Park.

Osman broke the deadlock with a deflected opener early in the second half before Phil Neville marked his 500th Barclays Premier League appearance by setting up Jagielka for the second.

Arouna Kone gave Wigan a late lifeline but it was not enough for the visitors who, despite a hard-working display, appear to be heading for another relegation fight.

A large group of Wigan fans came in banana costume, in keeping with their town's Boxing Day tradition of fancy dress.

But the party will be limited to town centre revellers after a sixth game for the Latics passed without a win.

The visitors thought they should have had a penalty when Shaun Maloney went down in a challenge from Osman but referee Lee Mason was not convinced.

Everton, who will now hope to push on and mount a strong top-four challenge, also had some good chances, not least when Thomas Hitzlsperger hit the bar.

Everton almost made the perfect start as Nikica Jelavic laid off a Darron Gibson cross and Victor Anichebe flashed a shot wide with just 13 seconds on the clock.

Wigan also wanted to attack and a good Jean Beausejour cross aimed at Kone was clutched by Tim Howard at the second attempt.

The influential James McCarthy also had a powerful effort from outside the area blocked.

Leighton Baines created a chance for Everton when he skipped over a challenge from Ronnie Stam to supply Steven Pienaar and Ali Al Habsi did well to turn his shot around the post.

Anichebe headed wide from a Hitzlsperger cross but Wigan began to assert themselves in the game more as McCarthy and James McArthur drove forward.

Kone and Maloney linked up well outside the area but attempted one pass too many and a promising attack broke down.

Maloney tried his luck from a free-kick after McCarthy was tripped by Gibson - who was free to play after appealing against his red card at West Ham last weekend - but Howard parried and then gathered.

Howard was in action again as Stam struck a low shot from 20 yards but saved comfortably.

Everton applied some pressure by winning a series of corners in quick succession and felt they should have had penalties at two of them.

Anichebe first claimed he was being held back by Beausejour and then there was an appeal for handball against Maloney but referee Mason gave nothing. The first half came to a tame end but Everton returned with renewed vigour after the break and were soon rewarded.

Wigan were given a warning when Hitzlsperger struck a thunderous long-range effort against the bar and then Osman dribbled his way through the area only to fail to test Al Habsi.

Osman got lucky when he next aimed for goal after 52 minutes, his shot from just outside the area striking Gary Caldwell's arm and wrong-footing the unfortunate Al Habsi.

There was controversy as Wigan tried to respond as Maloney went to ground in the area in a challenge from Osman.

Latics were incensed not to be awarded a penalty and Beausejour was booked for his protest but replays suggested Maloney may have already been going down before the contact.

Kone had a good opportunity from six yards after Maloney whipped in a good ball from the right but Neville made a vital block at point-blank range.

It was a miss the visitors were to rue as Everton grabbed a decisive second 13 minutes from time.

Neville was on hand to receive a short corner from substitute Bryan Oviedo and marked his landmark appearance by sending in an inch-perfect cross for Jagielka, who powered in a header off the bar.

But Wigan, as ever, fought on and gave themselves late hope when Kone bundled the ball in at close range after Jagielka and Baines failed to clear from a Maloney shot.

The visitors applied more pressure as time ran out but were unable to find a way through stubborn Everton defending.