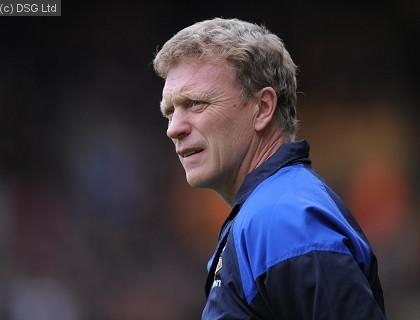 Everton displayed all the qualities which have kept them in the top four this season, fighting back from 2-0 down to draw 2-2 with Liverpool in the 219th Merseyside derby.

When Luis Suarez headed in his sixth goal in eight league matches in the 20th minute, after Leighton Baines had earlier turned the Uruguay international's cross-shot into his own net, the Reds appeared in control at Goodison Park.

However, in a pulsating first half Leon Osman pulled one back almost immediately before Steven Naismith equalised 10 minutes before half-time.

The remaining 55 minutes subsequently failed to match what had gone before, and although both sides could have won it after the break, the point was enough to keep Everton in fourth, six points ahead of their neighbours.

That may have contributed to what was a first 45 minutes so open it belied its history of being the oldest and longest-running cross-city rivalry in English football.

Suarez opened the scoring in the 14th minute. Steven Gerrard's pass sent Jose Enrique, on his first start since October 2, racing down the left and although his cross flashed through the six-yard area it was collected by the Uruguay international, whose drilled cross-shot return was deflected in by Baines.

His reaction was to race to the dug-out and dive full-length - in a celebration reminiscent of Jurgen Klinsmann's for his debut goal in English football in 1994 - in front of Toffees boss David Moyes after his pre-match comments about players going to ground easily.

Ironically, later in the half, it was one of Moyes' own players Phil Neville who was booked for diving on the edge of Liverpool's penalty area.

That prompted a swift retort from injured Reds defender Glen Johnson on Twitter.

"Haha classic P Neville battering Luis for diving, then what does he get booked for....?! Haha," he wrote.

"Worst dive ever.... Looked like someone tied his laces together while he weren't looking haha."

Six minutes later Osman's slight trip on Sterling presented Gerrard with the chance to curl in a free-kick and Suarez's deft header helped the ball past Tim Howard and into the far corner of the net.

For a team whose problems in scoring were well documented, things seemed to be going better than expected for Brendan Rodgers' side.

But Everton have not forced their way into the top four this season on a wing and a prayer, and they produced an instant response.

When goalkeeper Brad Jones, still deputising for the recovering Jose Reina who was on the bench, could only punch a corner to the edge of the area, Osman controlled and volleyed home.

The game, surprisingly, became even more open with Suarez shooting just wide before Marouane Fellaini, back from injury after two matches out, ran the ball out of play as he bore down on goal when teed up by Nikica Jelavic.

Derbies can do strange things to people - highlighted by Neville's diving aberration - and the sight of Tim Howard, one of football's genuine nice guys, hurtling out of his goal in an attempt to get 17-year-old Sterling sent off for what he thought was a second bookable offence was ungentlemanly and unnecessary.

But the hosts soon put the focus back on football when Fellaini's cross was left by Martin Skrtel and Naismith nipped in front of Enrique to equalise from close range.

Everton poured forward with the excellent Mirallas marauding down the left against the inexperience of Wisdom and Sterling.

The Belgian had one shot turned away by Jones and another blocked by Skrtel after a brilliant turn took him past Wisdom, reluctant to make a challenge in the penalty area, while Seamus Coleman also blazed over.

After such a rousing 45 minutes, the second half failed to live up to those standards.

Everton suffered a blow when Mirallas failed to appear after the break and was replaced by Magaye Gueye while Rodgers made a tactical switch by bringing on Sebastian Coates, another derby debutant, and Jonjo Shelvey to go 3-4-1-2.

Chances continued to be created with Sterling clipping an excellent chance wide having been put through by Enrique while Jelavic, surprisingly quiet in such an open game, just failed to connect in the six-yard box before heading wide Leighton Baines' free-kick wide.

Suarez, never far from the action, was fortunate to escape with a yellow card after standing on Sylvain Distin's Achilles after the ball had gone.

Gerrard had a shot blocked by Phil Jagielka before Suarez was incorrectly denied an injury-time winner by a linesman's flag.