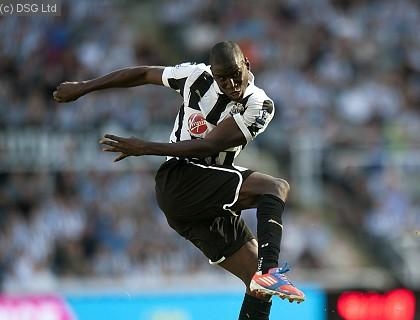 Everton justifiably felt aggrieved after having two goals controversially ruled out before Newcastle snatched a late 2-2 draw at Goodison Park.

Substitute Victor Anichebe, whose earlier header had appeared to cross the line but was not given, thought he had won it three minutes from time but Demba Ba scored his second of the night even later.

Leighton Baines had put the hosts ahead in the 15th minute only for Ba to score with virtually his first touch after coming on at half-time.

Marouane Fellaini's effort was ruled out on a questionable offside decision before Anichebe's disallowed goal added to the controversy.

While the post-match discussion was all about technology and officials' decisions, understandably the pre-match focus was on recognising the fight of Hillsborough campaigners in their battle for justice after the publication of last week's independent report.

The club's approach was pitched perfectly as, in addition to two mascots wearing an Everton number nine shirt and a Liverpool top with the number 6 and ball boys bearing the number 96, the names of all victims of the disaster scrolled across Goodison's television screen accompanied by the Hollies' `He Ain't Heavy...He's My Brother'.

David Moyes, in his programme notes, had summed up the feeling on Merseyside by writing: "I and everyone at Everton stands alongside the Hillsborough families.

"I am a football supporter and a father and I applaud the families who continued to fight for the ones they loved.

"The outcome (of the findings of the independent panel) was nothing short of disgraceful.

"We have all been brought up to believe and trust in authority...the authorities who were responsible for the safety of supporters that day let themselves down."

But while Everton stand side-by-side by their neighbours in relation to Hillsborough, they are pulling away from them in the table.

A draw extended the gap over 17th-placed Liverpool, whom they finished above last season, to five points.

They have been imperious at home in the last six months and that was reflected in a one-sided first half.

Magpies boss Alan Pardew, serving the first of a two-match touchline ban for shoving assistant Peter Kirkup on the opening day against Tottenham, must have run up a hefty bill trying to correct matters on the phone to coach Steve Stone, his go-between with John Carver in the dug out.

Nikica Jelavic had an early goal disallowed for offside but it set the tempo and when the breakthrough came in the 15th minute it was no more than the hosts deserved.

A 17-pass move merely reflected the Toffees' dominance as Baines raced onto a clever backheel from Steven Pienaar to fire past Steve Harper, in for the injured Tim Krul.

Kevin Mirallas, the #6million summer signing impressing on his first league start, had a couple of good chances while Phil Jagielka shaved the post with a volley from Jelavic's lay-off.

However, Newcastle striker Papiss Cisse should have at least tested Tim Howard with a volley after Phil Neville's poor headed clearance of a free-kick while Leon Osman was indebted to Baines' goalline clearance to prevent the equaliser.

The loss of Croatia international Jelavic with a knee injury just before the interval was a blow to Everton but not as much as Ba's equaliser just after the break.

Within four minutes of being introduced, the half-time substitute hit a low shot past Howard after Yohan Cabaye robbed Osman and rolled a perfectly-weighted diagonal pass into his path.

It was the first goal scored by an opposition player at Goodison Park since Thomas Vermaelen's winner for Arsenal on March 21, a run of 11 hours and 11 minutes.

Harper's sportsmanship did Anichebe a favour when he made little of the forward's late sliding challenge, intimating to referee Michael Jones he did not have an issue with the tackle.

Fellaini had a goal ruled out for offside, a decision which was marginal at best, but only goalline technology - which does not come in until next season - could have assisted Jones with his next decision as Anichebe's header tipped onto the crossbar by Harper appeared to bounce down over the line before Mike Williamson cleared.

Anichebe left no room for doubt three minutes from time when he turned in the penalty area to fire home but Everton's celebrations were short-lived when Ba latched on to Shola Ameobi's knockdown to roll a shot under Howard.