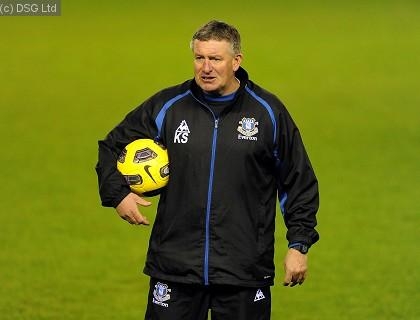 Everton's impressive start to the season continued - as did striker Nikica Jelavic's goalscoring run - as they won 3-1 against a Southampton side whose top-flight inexperience was exposed at Goodison Park.

Jelavic scored twice to take his tally to 10 in his last 11 league matches after Leon Osman had cancelled out Gaston Ramirez's early opener.

The feeling on Merseyside, which is becoming increasingly apparent further afield, is that Moyes has assembled the best squad of his 10-year tenure.

Their statistics this season seem to give some credence to that suggestion as Everton, the perennial slow starters, managed just two wins from their first seven league matches last year and did not win a league match until October the campaign before that.

After such an impressive start, the players are having to deal with the prospect of handling rising expectations, but they were not so adept at dealing with Southampton's set-pieces.

From Adam Lallana's corner Ramirez was given the freedom of the penalty area to nod in the simplest of headers.

It was the Uruguay international's first goal in English football following his club-record #12million summer transfer from Bologna and the first time Everton have conceded in the opening 45 minutes of a Premier League game this season.

Southampton were to regret Jay Rodriguez's inability to hit the target - let alone test Tim Howard - when he outpaced the Toffees defence soon after.

Everton turned the game on its head in a 14-minute period which exposed all the flaws characteristic of a newly-promoted team.

Kevin Mirallas swung over a right-wing cross and although Jelavic threw himself at it he succeeded only in diverting it back to Osman, who smashed the loose ball into the roof of the net from close range.

The goalscorer returned the favour when his throughball sent Jelavic running through the inside-left channel, but Paulo Gazzaniga's woeful positioning made it all-too-easy for the Croatia international to fire a shot across him.

Southampton's goalkeeper redeemed himself slightly by brilliantly clawing out the striker's header destined for the top corner but was powerless to prevent him nodding in Seamus Coleman's cross to the far post.

The visitors have the leakiest defence in the top flight and it was easy to see why as they were so open in the second quarter of the game they appeared to be in disarray.

Everton should have had the game wrapped up before the break; their confidence was highlighted by Mirallas' attempted overhead kick before Marouane Fellaini hit the crossbar with a header.

The Belgium international almost clinched the result early in the second half with a long-range effort tipped just wide by Gazzaniga before Osman and Mirallas also tried their luck from the edge of the box as their toothless opponents offered little in the way of resistance.

However, without the fourth goal to kill off Southampton Everton were always a hostage to fortune and Ramirez's clip past Howard but past the far post from a narrow angle was a warning of that.

But luck seemed to be on the hosts' side as Leighton Baines almost caught Gazzaniga unawares with a hanging cross-shot which the goalkeeper had to back-pedal to tip over.

For Southampton manager Nigel Adkins, a Birkenhead-born Liverpool fan, it proved to be an unhappy return to the region.

As far as Everton are concerned, their progress could not be more serene and with trips to struggling Wigan and QPR up next there is every prospect of it continuing.