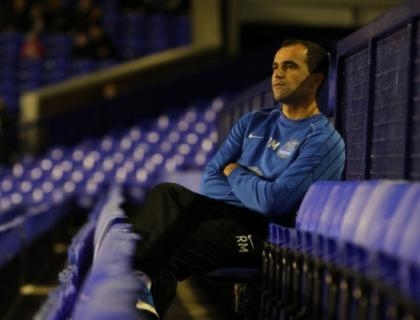 
The 19-year-old product of the famous La Masia academy showed no sign of nerves after deservedly being given his chance by Catalonia-born manager Roberto Martinez.


Martinez has brought a Spanish flair to a side previously cast in the image of former boss David Moyes, a doughty and gritty Scot.


Deulofeu embodies the new freedom enveloping Goodison Park which saw them easily sweep aside the Potters with other goals from Seamus Coleman, Bryan Oviedo, deputising for the injured Leighton Baines, on only his second league start in nearly 18 months, and Romelu Lukaku.


Ironically, however, there was not as much of the flowing football as the previous week's 3-3 Merseyside derby draw which Liverpool manager Brendan Rodgers likened to a basketball game it was so open.


But in Deulofeu Martinez has acquired a bright talent whom he admits had been champing at the bit for a start after a string of impressive substitute appearances.


The teenager's potential, having scored 18 goals in 34 games for Barcelona B last season and with five first-team appearances under his belt, was never in question but his ability to adapt to English football was his manager's primary concern.


Even he admitted pre-match Deulofeu had exceeded his expectations as he did not think the youngster would be ready for the league until January or February.


On this display it may be then before Kevin Mirallas, the man the Spaniard displaced, gets back into the side.


The first-half focus was almost entirely on the Barca boy, who fittingly produced the first and last action of the opening 45 minutes with plenty of contributions in between.


Having seen an early low free-kick parried by Asmir Begovic Deulofeu's angled shot was also denied at the near post.


Stoke's keeper was by far the busiest and when James McCarthy charged forward and exchanged passed with Lukaku the Bosnia international could only watch the midfielder fire wide.


Begovic produced a brilliant double save by Begovic to stop Leon Osman's deflected shot and Lukaku's close-range follow-up either side of another two angled efforts from Deulofeu before Lukaku headed wide from Oviedo's cross.


The traffic was virtually one way and Stoke managed just one shot on target late in the half when Jon Walters strike from Peter Crouch's knockdown was easily saved by Tim Howard.


Just as it appeared Everton's dominance would go unrewarded Deulofeu struck, cutting in from the left this time and getting the ball back via Osman and Gareth Barry to finally beat Begovic with seconds in the half remaining.


Four minutes after the break right-back Coleman made it 2-0 when his mis-hit shot looped past the Stoke goalkeeper after another mis-kick by Barry.


Deulofeu was far from finished however and would have won a penalty had he gone down under Glenn Whelan's challenge but he stayed on his feet and Begovic parried his shot and denied Lukaku on the rebound.


If Coleman's goal was a surprise Oviedo's was totally unexpected. The Costa Rican collected Deulofeu's short corner, switched the ball on to his weaker right foot and powered it home from distance.


The defender then turned provider with the cross for Lukaku to score his eighth league goal of the season from close range to add to the two he scored last weekend against their near-neighbours.


Lukaku was immediately replaced by Nikica Jelavic, who has scored just one league goal since December 9, and his lack of confidence showed as with only Begovic to beat he bundled a shot straight at the goalkeeper in the 89th minute.


It mattered little as the Gwladys Street has a new hero to worship, for the remainder of this season at least.