5 Everton Players Who Could Break Through in 2020

With Carlo Ancelotti now installed as Everton manager and looking to stamp his mark on the squad, he will most likely dip into the transfer market in January to strengthen his side.

However, the new Toffees' boss also has a selection of promising prodigies on his hands with the potential to break into the first team or nail down a starting birth in the senior side this year.

Everton have a rich history of producing talented youngsters, with the likes of Wayne Rooney, Ross Barkley and Jack Rodwell all progressing through the academy at Goodison before securing big money moves to the Premier League's elite.

Who, from Everton's current crop of players, could have a similar impact in 2020? The defensive midfielder was handed his first team debut in the League Cup in October 2017 when David Unsworth was in temporary charge. The then 19-year-old put in a hugely impressive debut, and was rewarded with further first team outings over the course of the season.

However, the arrival of Marco Silva saw Baningime's game time restricted, and the midfielder was shipped out on loan to Wigan in January 2019. Injury limited his impact at the DW Stadium, but since returning to Goodison, the 21-year-old has excelled in David Unsworth's Under-23 side.

The holding midfielder is energetic, intelligent and a superb reader of the game. Baningime is the natural successor to Morgan Schneiderlin, but should a first team opportunity present itself this season, expect the youngster to grasp it once more. Everton paid £4m to prize Dennis Adeniran away from Fulham in 2017, despite the midfielder only making five senior appearances at Craven Cottage. After a promising start to life with the Under-23s, injury problems plagued Adeniran's first season at Goodison, and the 21-year-old is still yet to make a Premier League appearance for the Toffees.

However, the central midfielder has shone for the youth side this season, demonstrating his speed, power and quick feet. Adeniran also has versatility on his side, having put in a number of shifts on the right wing this campaign.

The youngster has really matured this season, and has been training with the first team, suggesting a senior call up could be on the cards sooner rather than later. Aged just 16, Tyler Onyango ​has already made the step up to ​Everton's Under-23 side after dazzling for the Under-18s. Standing at 6'3, the midfielder is a tremendous athlete, with great pace, strength and power.

Bosses at Goodison have preached patience with the highly rated teenager, after he exceeded expectations and was called up to the Under-23 side much sooner than expected.

Managers are often wary of calling youngsters up to the senior team for fear that, for all their technical ability, they will not be able to cope with the physical nature of the Premier League.

Onyango's impressive physique means this should not be an issue for the 16-year-old. Although a first team appearance is a way away for the midfielder at the moment, at the rate he is moving through the Goodison ranks, you wouldn't bet against it coming sooner than anticipated. 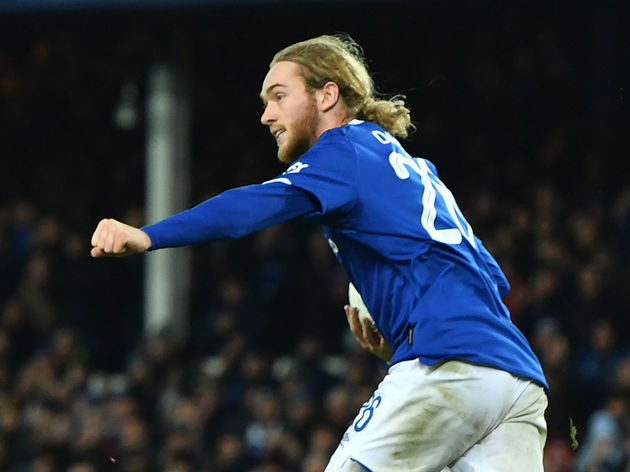 Having made his Everton debut way back in April 2016 aged 17, Tom Davies has arguably already 'broken through' at Goodison. However, since putting in a sparkling display in a 4-0 win over Pep Guardiola's Manchester City in one of his first appearances for the club, the midfielder has failed to fulfil his undoubted potential and nail down a starting birth.

He made just 16 appearances during the 18/19 campaign, but has begun to become a more regular fixture in the starting XI this season, starting 11 games​ and playing the full 90 in Carlo Ancelotti's two most recent Premier League fixtures.

The academy product is clearly a huge talent with superb skill and technical ability. If he can find some consistency, Davies will be a mainstay in the Everton starting XI in 2020. Anthony Gordon made his Everton debut off the bench as a 16-year-old in the Europa League back in 2017​. The striker was on the brink of the first team during Marco Silva's final few months in charge, having been part of a 20-man squad in the Carabao Cup, and regularly training with the senior side.

The 18-year-old has rapidly matured and grown in confidence this season, and has been banging them in for the Under-23s.

Gordon is tricky, with great feet and an eye for goal, and could earn a first team call up under Ancelotti if he continues to turn in impressive youth team displays.