As the 2018/19 Premier League season ​came to a dramatic end on Sunday afternoon, Manchester City were crowned champions after dispatching Brighton 4-1 at the Amex Stadium to claim a second successive title.

As football fans now look to fill the familiar void left behind at the end of every campaign, we've complied a list of our six best moments in the Premier League this season that capture the highs and the lows of the beautiful game. During most ​Premier League weeks somebody scores an absolute screamer, and the 2018/19 season certainly didn't fail to live up to that precedent. With a dozen goals to pick from however, including an ​Eden Hazard solo masterclass against ​West Ham, there can only be one winner (sorry ​Chelsea fans).

Although Hazard's was sheer brilliance, Andros Townsend's wonder strike against champions ​Manchester City in December is simply unforgettable. As the danger was partially cleared by Bernardo Silva's header, Townsend got his head over the ball and smashed it first time from over 30 yards out - the resulting strike buried itself in the Manchester City net.

If it’s purely a vote we won’t win this one  https://t.co/wJ6xGcssZi 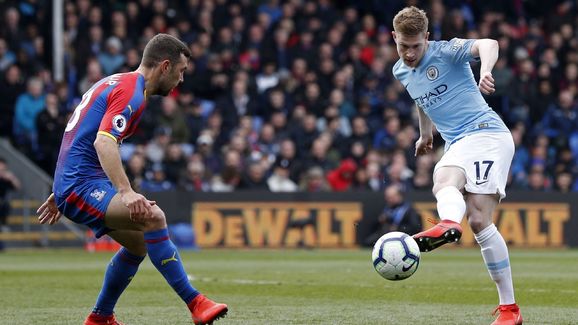 Having already beaten 3-2 by Palace at the Etihad, Pep Guardiola's side made amends for their loss when they beat Hodgson's side 3-1 at Selhurst Park in April. With ​Kevin De Bruyne back in the starting XI after struggling with injury, his assist for ​Raheem Sterling's opening goal was incredible.

In a game that certainly posed a threat to Manchester City's title hopes, their Belgian maestro delivered exactly what so many football fans have come to expect from him in past seasons. After picking up the ball just inside his own half, the midfielder swept a low ball across the turf to the quick feet of Sterling who smashed it home from a tight angle. Providing some specific moments of magic for ​Leicester City in his debut season in the Premier League, midfielder James Maddison has seriously impressed with his quick feet and

Having played fairly decently under former manager Claude Puel, since Brendan Rodgers' arrival at the East Midlands club Maddison has began to shine with even greater promise and is enjoying the style of football being built at Leicester. In a game that was tight until the final whistle, ​Live​rpool's 3-2 victory over ​Newcastle at the tail end of the season was an unforgettable night in the race for the 2018/19 Premier League title. ​Divock Origi

Having gone one up from an early Virgil van Dijk header, it wasn't long before the Magpies mustered a reply through a Christian Atsu. Just as the game went back to a stalemate, both sides traded goals either side of half time thanks to strikes from ​Mohamed Salah and Salomon Rondon.

Divock Origi's dramatic late header puts Jurgen Klopp's side back on top of the #PL table after a pulsating match #NEWLIV pic.twitter.com/2W4yD4Hymf

At 2-2 going into the 86th minute however, Divock Origi sent the visiting fans home on a high as they watched the Belgian flick a header into the far corner of the net to snatch all three points. In hindsight, you have to feel for ​Jordan Pickford after his mistake against Liverpool in December. How was he to know Divock Origi was such a prolific late goal scorer?

The ​Everton goalkeeper watched a sliced shot bounce on the crossbar and seemed hesitant whether or not to tip it over the woodwork, try and catch it, or stand still and hope it went over. In the end the England international did a mix of all three and waited for it to drop onto the head of Divock Origi before he nodded home in front of the home fans.

To make matters worse for Pickford, not only did the header cost Everton a goal, Liverpool won the game 1-0 courtesy of his blunder...