​Stay home, stay safe, and get yourself onto Football Manager 2020. Of course, it's not the only football-related thing you can be doing at the moment, but in the absence of our beloved beautiful game, what better way to get your football fix than by giving management a go?

And, for those Everton fans out there, and anyone else who fancies a season or two with the Toffees, there are certainly plenty of fun things that come as part of the Blues' managerial package.

So, sit down, start an Everton save, and give a couple of these ideas a crack...

Win a Trophy, Any Trophy 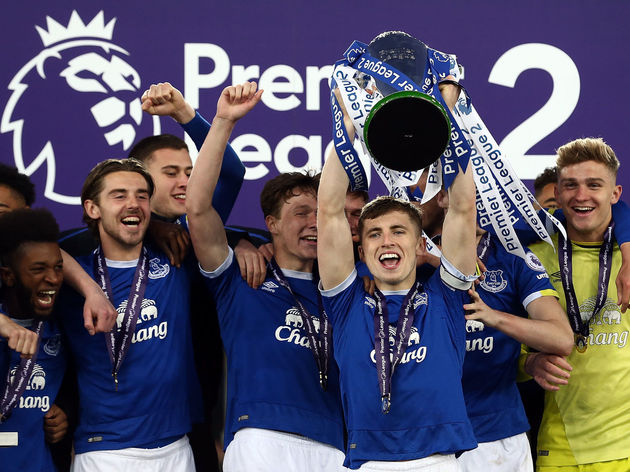 ​Yes, we know the above photo is of the ​Everton side that won the Premier League 2 title. But, the point here is, Everton's first-team are in desperate need of a trophy win.

When did they last end the season with a piece of silverware? Well, you have to go back to 1995 campaign. They won the FA Cup, and Charity Shield (as it was then named.)

It's safe safe to say that the most important thing to do first when taking the Everton job on Football Manager is to win a goddamn trophy. Even the Carabao Cup would be a considerable coup. Just make it happen for the poor Evertonian faithful. ​This might not be possible straight away, at least in the case of the stars you want to bring in to catapult the Toffees to the top of the table. But, how about infiltrating your arch rivals stores, and signing exclusively ​Liverpool players?

You could start with, say, Xherdan Shaqiri. It's likely to be an easy deal to engineer on FM. And, once you've established yourself and the club as a financial powerhouse, and ​Premier League force, you can begin to tear apart Jürgen Klopp's relentless Reds.

Imagine it - ​Mohamed Salah shocks the world as he hands in a transfer request to force through a move across town to Liverpool's biggest foes. The great thing is - you can make it happen, if you play your cards right. ​Now, it might be the case that Liverpool continue to top the Premier League for the foreseeable future. And, as you build your Everton side slowly but surely, one of your first focuses can be to prevent any Liverpool success.

Even if you're having a tough time in your first season or two, make it your absolute purpose in life to ensure one thing - you beat Liverpool on every occasion possible. Make it harder for them, and as your side strengthens, the tide will turn in the battle for the Merseyside bragging rights. ​If you're serious about launching a successful Football Manager career with Everton, keeping ​Richarlison around is non-negotiable.

There was talk of ​Barcelona making a £85m bid in the January transfer window. The Brazilian is only 22, and is already one of the the Premier League's most dangerous forwards.

Though the thought of a considerable financial boost may prove difficult to turn down, you've got to think about the long-term process towards success. Building your side around Richarlison is a safe bet to ensure just that.

 | #OnThisDay in 1987 #EFC were crowned champions of England for the ninth time.

So, Everton have actually won nine top-flight titles. And, the last time they managed to do so was in 1987. So, Football Manager hopefuls will know this won't be a simple task.

And yet, imagine if you led the Toffees to the Premier League title. Not only would it involve probably beating Liverpool to it, but would also signal that Everton are well and truly back among the country's top sides.

​Get Rid of Under-Performers Once you become Everton's boss, you will have the final say on all the transfer incomings and outgoings. Good thing that, because the Blues' recruitment these past years has been well below par.

With several managerial changes, the squad remains relatively unbalanced, and several expensive signings continue to turn in sub-standard performances on a regular basis.

Attackers such as Gylfi Sigurdsson, Bernard, and Theo Walcott are a few that come to mind. Get them on the transfer list, and reinvest for Everton's future.

​Carlo Ancelotti was brought in as a final push to propel Everton firmly into the Premier League's top-side bracket. And, one of the first things to tick off your managerial checklist is to get Everton into the Champions League.

Finishing in the top four - a feat the Toffees haven't managed it since 2005 - would be an excellent first success for your Football Manager 2020 Everton career. Make it happen!