Brighton produced a strong second half display to see off battling Everton side 1-0 at the Amex Stadium on Saturday.

Top flight debutant David Button survived a big scare just before the half an hour mark, as the Brighton goalkeeper spilled Theo Walcott's seemingly harmless low ball into the area straight into the path of Richarlison. Fortunately for Button, Shane Duffy was on hand to block the Brazilian's shot on the line.

Button made up for his clanger just two minutes later, as the goalkeeper made a fine save to deny Richarlison a first half opener once more.

​Brighton carried a greater attacking threat in the second half, as Florin Andone drew a fine save from Jordan Pickford after the striker produced a strong header from a corner.

The home side did not have to wait long after to make their pressure tell, as Jurgen Locadia fired home following another corner on the hour mark. The goal was given after some deliberation from the officials, before it was decided that Locadia was not offside in receiving the ball.

​Everton almost provided an immediate response as the visitors broke up field at speed, but ​Richarlison saw his powerful strike turned onto the post through a fine save from Button. Kurt Zouma also hit the bar with just four minutes remaining but Brighton held on to seal a hard fought win.

What Brighton lack in terms of technical quality, in contrast to the more technical ranks of Everton, the Seagulls compensate for in terms of sheer hard work and application.

Chris Hughton has his side well-drilled, with a clear sense of team unity and collective effort among the Brighton ranks. Florin Andone sets the tone up front with strong pressing work, whilst the midfield and defensive ranks remain compact and disciplined. Without any real top talent in the side, Brighton are never going to be the most exciting team in the league, but organisation and resolve are more important to Chris Hughton's side's hopes of surviving in the Premier League and the Seagulls have those qualities in abundance.

Locadia may have been the one to fire Brighton ahead, but Andone was brilliant in setting the tone of intensity from the front line for the home side. Playing as the lone frontman, there was a risk that the Romanian could have been left isolated, but the striker's hard work and tireless running across the front line ensured that the Seagulls maintained a sense of purpose in attack.

Brighton were generally effective to a man on Saturday, but Davy Propper had one of his less influential games at the heart of midfield. The home side worked hard from front to back, but Propper did not produce any individual moments to savour.

Though Marco Silva's 3-4-2-1 setup still has rough edges to be ironed out in terms of shape (positioning and discipline in defensive terms), the greater fluidity of the shape enables a more plentiful attacking threat from the Toffees - albeit Everton lacked the killer touch on Saturday.

With Richarlison spearheading the attack and Bernard and Theo Walcott playing off the front man, Everton's front line bursts with pace, power and an abundance of thrust which Brighton's back line struggled to deal with. Shane Duffy and Lewis Dunk were each required to make heroic blocks to twice prevent Everton from taking an early lead within the opening half an hour. 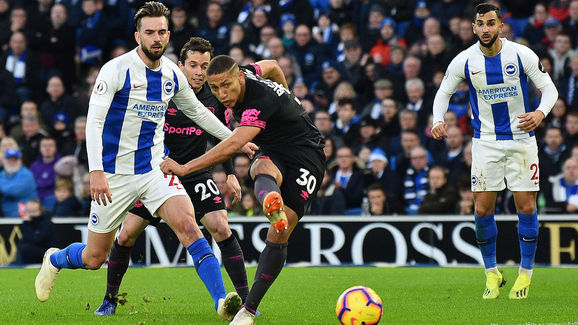 However, though the front trio work well in tandem, the back three requires some work. Kurt Zouma, Yerry Mina and Michael Keane are all defenders of high quality and have the capacity for the system to succeed, but the trio must work on holding a firmer line and remaining a solid in-sync unit.

Though Everton have much work to do in terms of organising their back line as a defensive unit, Kurt Zouma stood out at the Amex Stadium with a strong performance in which the Frenchman's power and commanding presence ensured that the visitors were not overrun at the back by Brighton's intensity in attack.

Bernard has enjoyed a strong start to life at Everton since arriving at Goodison Park during the summer, but the Brazilian was largely ineffective at the Amex Stadium. The diminutive forward struggled to impose his attacking flair against a physically-imposing Brighton back line, as Everton failed to breach the home side's rear-guard.

Brighton do not have long to wait until their next Premier League outing, as the Seagulls travel to face West Ham at the London Stadium on Wednesday. Chris Hughton's side then face Premier League rivals Bournemouth in the third round of the FA Cup at the Vitality Stadium just three days later.

FT | Blues hit the woodwork twice in a disappointing end to 2018. #EFCawayday