Carlo Ancelotti has warned Barcelona that they would need to make an offer Everton 'cannot refuse' to sign Brazilian forward Richarlison at the end of the season, while stressing his reluctance to sell.

The Spanish side were rumoured to have failed with an £85m bid for Richarlison during the January window, and while ​such claims were quickly rubbished, it is thought that there may be some substance to Barcelona's interest. However, regardless of whether they are interested or not, it looks like Ancelotti has little interest in selling a key player.

“I don't think it will be difficult to resist [a summer bid for ​Richarlison] because it is enough to say no, there is no possibility because Richarlison is an important part of the future of ​Everton,” the boss said, via the Daily Star.

“This is the base from which the club has to build the future, and Richarlison is part of it, like the other young players we have - [Jordan] Pickford, [Mason] Holgate, [Moise] Kean, [Michael] Keane, [Dominic] Calvert-Lewin. We have a lot of young players.”

Michael Keane is actually 27 years old, but we'll move on.

Ancelotti did joke that he might listen to a swap deal from ​Barcelona, hinting that he might be prepared to part with Richarlison if one of the world's best players was on the other end of the offer.

“I don't want to say anything but with Barcelona you can also do an exchange, no? They have a lot of fantastic players but I'm not nominating anyone!" he laughed.

“Everything can happen in football. If an offer arrives that you cannot refuse, and it is an offer that can improve the squad, then why not? But, now, I can say Richarlison is an important part.

"Richarlison renewed his contract one month ago. I was not here when he renewed but the fact that he renewed made me happy because he's a fantastic player. 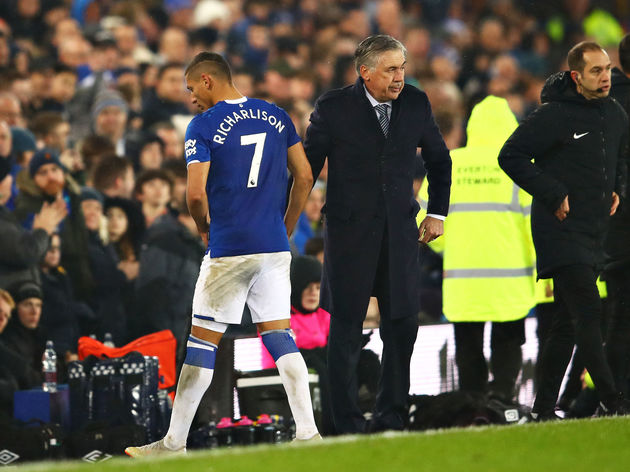 “He can play everywhere. He's a modern striker in my opinion. He can play left, right, back or as one central striker. Technically he can improve but his movement is really good, his heading his fantastic, I was surprised, and he has a lot of power in his legs.