The Merseysiders found themselves in a relegation battle when the Italian took over at Goodison Park in late December, but their season has transformed and they now find themselves 12 points clear of the drop zone. 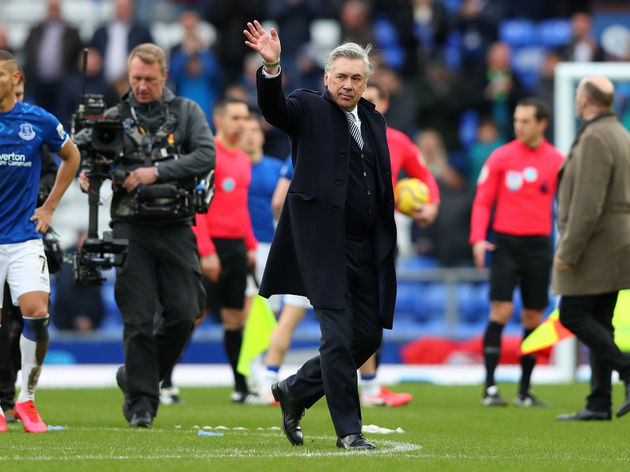 Ancelotti is no stranger to a raised eyebrow, and the following stat may just make the former Napoli boss raise both: Per ​Opta, only city rivals ​Liverpool (24) have won more Premier League points than ​Everton (17) since the Italian’s first game in charge back in December.

A narrow 2-1 defeat at reigning champions Manchester City remains the Toffees’ only defeat while Ancelotti has been at the helm, and Saturday's win over Roy Hodgson’s men saw them climb above Manchester United, Wolves and Arsenal in the table.

Much was made of Everton’s decision to rebuff Barcelona's​Richarlison It remains to be seen whether Everton can maintain this rich vein of form and challenge for a European spot come the end of the season. The Toffees face a daunting run of fixtures over the coming month, with ​Manchester United, Liverpool and Leicester all visiting Goodison Park, while trips to Arsenal, Chelsea and Tottenham are also on the horizon.

If Ancelotti can keep Everton in the top half of the table throughout those fixtures, the Toffees will be in with a real chance of securing European football for next season.

Regardless of whether they finish in a Europa League place or not, Ancelotti has revitalised an Everton team which looked to be heading for relegation from the top flight of English football since 1951.