​England's 2018 World Cup success was simultaneously the best and worst thing to happen to Jordan Pickford. The final straw has to be Everton's 3-1 victory over Crystal Palace. Yes, we know he made a stunning save from point blank range flinging himself at the ball in kamikaze fashion, but it's the shot he didn't keep out that's the concern.

The only goal that Everton conceded came at the hands of Christian Benteke - a man in woeful form. In fact, the Belgian forward hadn't scored since April and yet his rather uninspired second-half strike wormed its way under the body of Pickford, who adds yet another gaffe to his ever-growing list this campaign. While it proved incidental come the final whistle, it's another warning sign for Gareth Southgate, simply showing us that the Toffees' shot-stopper can't be trusted.

This is not a one off, oh no. Since the beginning of last season, ​Pickford has made six errors that have led directly to opposition goals in the ​Premier League - most notably his absolute howler at local rivals Liverpool last campaign, juggling the ball off the bar and straight in to the path of Divock Origi with just seconds remaining and the game goalless.

Pickford has already conceded 38 goals this season in the league as well, just eight fewer than he did in the entirety of last campaign. Hardly great for the confidence of those in front of him at international level.

So, who is there waiting in the wings? Well, Dean Henderson. 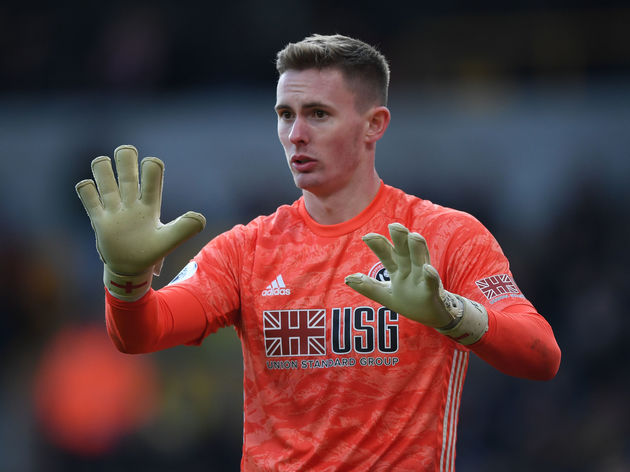 You don't need us to tell you that Sheffield United have been a revelation this season. The newly-promoted Blades have been remarkable, leapfrogging their way in to contention for the Europa League and, dare we say, Champions League next year.

The key to United's success has been their defensive rigidity, with ​Manchester United loanee Henderson playing a crucial part. By contrast to Pickford, Henderson has made fewer errors, conceded 17 fewer goals and also kept three more clean sheets than his fellow countryman.

The Sheffield United shot-stopper has been mightily impressive, making both routine and spectacular saves, with just the one high-profile error to his name - earlier in the season against Liverpool in Yorkshire.

Henderson has been so good that he's even being touted as the successor to ​David de Gea at Old Trafford next season, although that would be a step backwards in his career based on the current league position of both teams.

While the policy of 'If it's not broke, don't fix it' has usually applied for England at international level, times are changing. Southgate has instilled new belief in to the Three Lions squad and is not shy of making big decisions and, more importantly, big cuts. While Pickford should definitely be on the plane for Euro 2020, he should not be on the pitch. Since Pickford's breakout World Cup, it's almost as if only the spectacular satisfies him now. Instead of making a routine save, he will leap in to air to palm the ball away, throwing caution to the wind in an attempt to achieve a standing ovation from the onlooking supporters.

This kind of ego boost is a luxury England can ill-afford going in to a major tournament.

Instead of opting for the maverick, let's choose the sensible option. Henderson offers a safe pair of hands, and will arrive at Euro 2020 with the Chris Wilder motto of 'do the simple things well'. While there is little glitz or glam in opting for the 22-year-old, the United keeper can still pull off the remarkable, having made a string of wonder saves at various points this season.

However, more than anything, Henderson offers some much-needed respite from the chaotic world of Jordan Pickford.