It must be a hard life supporting Everton.

Recently, the Merseysiders haven't even been good enough to fight for what has now been coined the 'Everton Cup' (7th place), with a string of lucrative and underwhelming investments costing the Toffees big time.

Oh, and there was the complete incompetence of Marco Silva as well.

But, rather remarkably, no team other than Liverpool have picked up more points than Everton since Carlo Ancelotti arrived in the Goodison Park dugout. Not Manchester City, not Leicester, not Chelsea. Nobody. 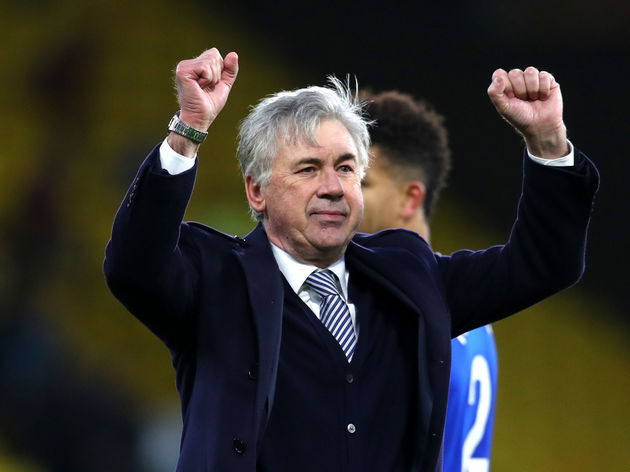 And it's hardly surprising that one of the world's most experienced managers has turned the side's fortunes around, carrying on the very brief legacy left by interim manager Duncan Ferguson.

Yerry Mina and Lucas Digne are both former Barcelona players, while Fabian Delph is a serial title winner with Man City. Alex Iwobi and Theo Walcott both played for Arsenal under Arsene Wenger, Moise Kean arrived from Juventus in the summer with a blossoming reputation, and Morgan Schneiderlin and Michael Keane have both spent time at Manchester United.

But, while all of the above have played varying parts in Everton's resurgence, it's the emerging strike partnership of Dominic Calvert-Lewin and ​Richarlison that has made the difference.

And while Ancelotti has reaped the rewards of this increasingly deadly duo, he can't take full credit.

Following the dismissal of Silva, club legend Ferguson took his place in the hot seat. Going back to basics, the former forward opted to play two up front, picking the biggest and most physical attackers he had at his disposal.

Up stepped Calvert-Lewin and Richarlison.

The work ethic and organisation of Ferguson's Everton was unrecognisable, and the Toffees thrived as a result, putting in more tackles in their 3-1 win against ​Chelsea than they had in any other game during the 2010s.

Unsurprisingly, the Blues couldn't cope, with the hard work and ferocity of the front two being rewarded with goals for both.

Ancelotti then took charge, but the wise old fox decided to keep the balance, persisting with the Calvert-Lewin and Richarlison up top. 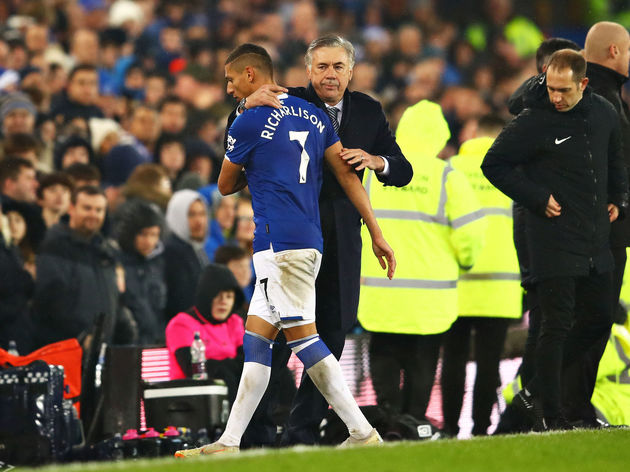 Since that emphatic victory over Frank Lampard's side, Calvert-Lewin has scored six goals and registered one assist, while Richarlison has scored three and laid on another two in all competitions. This puts the pair on 20 league goals for the season, nine more than the rest of Everton's players put together.

And not only is there an end product to their play, there is a relationship forming.

Perhaps the best example of this is during Everton's 3-1 win over ​Crystal Palace, in which both strikers found the back of the net. The understanding of each other's style is growing, while also fully immersing themselves in the philosophy of their new manager. Both players are willing to work tirelessly for the cause, and their link-up play is becoming tantalisingly seamless.

In particular, Calvert-Lewin has shone through. Seemingly arriving in to the season as a bit-part player - especially given the big-money signing of Kean - few at Goodison really knew where the 22-year-old fitted in.

Was he a striker? Was he a number ten? Could he play out wide?

Well, it turned out the former was true, and all he needed was an experienced coach to bring out his best. Calvert-Lewin is an old-fashioned centre-forward, capable of putting his body about and holding up play due to his imposing physical stature. The attacker is gifted in the air and brings teammates in to play effortlessly, often creating space for others by drawing in several defenders at once.

Hence why his relationship with Richarlison is so strong, with his Brazilian partner perhaps the more technically-gifted individual, capable of creating something out of nothing and showcasing his powerful running and dazzling skill set.

But it doesn't work without the physicality and efforts of Calvert-Lewin, who himself is adding a killer instinct to his repertoire - and perhaps even catching the attention of Gareth Southgate heading in to Euro 2020.

With all this in mind, suddenly Everton look capable of securing a European place should their stellar form continue. Out of nowhere, Calvert-Lewin and Richarlison's partnership has breathed new life in to Everton, and, with all around them faltering, the sky truly is the limit for Ancelotti's side.