Everton and Watford were involved in a dramatic Monday night game which ended all square at Goodison Park as Lucas Digne grabbed a last minute equaliser for the Toffees.

Ex-Watford man Richarlison gave Everton the lead after 15 minutes before second half-goals from Abdoulaye Doucoure and a Seamus Coleman own-goal gave Watford the lead. After Ben Foster saved a Gylfi Sigurdsson penalty, it was left to the 96th minute and Lucas Digne to grab an equaliser with a stunning free-kick. 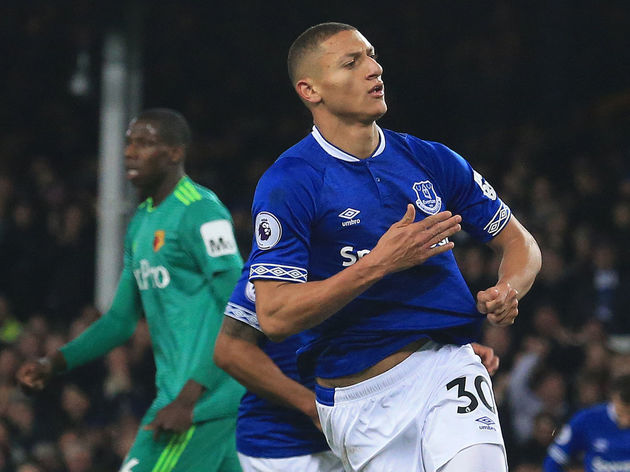 After a frantic opening 15 minutes with both sides creating half chances, it was the home side that broke the deadlock through the ex-Watford man Richarlison. After some nice link-up play between Coleman and Andre Gomes, the latter whipped a ball in from the right-hand side towards Richarlison who powered a first-time finish past Foster in the Watford goal.

The goal seemed to spark Watford into life as they began to look the more lively but couldn't create anything clear-cut before half-time. As the whistle blew for the break, Watford boss Javi Gracia was on the pitch to confront referee Kevin Friend after a tackle on Isaac Success from the already-booked Yerry Mina went unpunished when he could well have been sent for an early bath.

Watford did grab a deserved equaliser just after the hour mark in bizarre circumstances. A Deulofeu cross was met by Roberto Pereyra who crashed the ball onto the left-hand post, only for the ball to ricochet onto the unfortunate Coleman and into the Everton net.

Two minutes later and the Hornets were ahead, Pereyra was fed the ball down the right and stood a ball up to the far post, Doucoure was the man coming onto the ball and easily out-jumped Coleman to power a header past Jordan Pickford to make it 1-2.

In a crazy five minutes, Everton were soon awarded a penalty after a push in the box from Christian Kabasele gave referee Kevin Friend no hesitation in pointing to the spot. The usually reliable Sigurdsson stepped up but Ben Foster was able to deny the Iceland international with his legs as he struck the spot-kick straight down the middle.

FT | @LucasDigne rescues a point with the latest of late goals and what a strike it was! #EFCMatchday pic.twitter.com/JtZ2Ph5C4y

Everton pushed for an equaliser late-on and after 96 minutes they had a chance to equalise when they were awarded a free-kick 22-yards out. Lucas Digne stepped up and whipped it over the wall past the helpless Foster to send Goodison Park into raptures.

After the Richarlison transfer saga in the summer, the spotlight was always going to be on the £50m man playing against his former employers for the first time. It was inevitable that the Brazilian was going to get on the scoresheet and duly did so after just 15 minutes with a lovely first-time finish.

The forward had some rough treatment all night from his ex-team mates after being clattered a number of times, notably an elbow in the first half from Doucoure. Richarlison did have a chance in the second half to equalise but was unable to get his shot-off. STAR MAN - Despite Richarlison grabbing a goal, it was Andre Gomes that provided the assist and had an extra bit of quality about him all night. Easy to see why Barcelona forked out in excess of £40m for the Portuguese playmaker.

WORST PLAYER - Theo Walcott had a difficult time, particularly in the first-half. His work-rate and willingness to run at Jose Holebas could not be in question, however he was lacking the end product tonight and was dispossessed a number of times. On his day, his ability can not be doubted but he seemed a little off the pace.

With this fixture being labelled as a 'grudge match' due the bad blood between the sides following the Marco Silva and Richarlison saga's, it was interesting to see how Javi Gracia - the man who replaced Silva - would perform against his opposite number, as his Hornets side had failed to win any of their previous five games against the Toffees. But Gracia proved what an astute manager he is. Watford were the better side for large parts of the game and were unlucky not to claim all three points due to a 96th minute goal. Even so, Gracia got the better of Silva tonight.

After recently signing a five-year deal, Watford may be looking for continuity following a managerial merry-go-round in recent seasons.

STAR MAN - Roberto Pereyra looked a threat to the Everton backline all evening. The ex-Juventus man has been in good form all season and carried that on at Goodison Park. It was Pereyra's shot which cannoned off the post onto Coleman and into the net for Watford's equaliser.

I don't know what to do with myself. My heart rate is through the roof! I'm still so wary of how easily this game can turn around, but well done boys getting the lead. Big mentions to Pereyra, Doucoure, Quina and Foster for the last 10 minutes!

The Argentinian also set up the Hornets' winner when he stood a cross up for Doucoure to power a header home so he deserves all the plaudits. 19-year-old Domingos Quina - making his full Premier League debut - was also fantastic for Gracia's side.

Next up for Everton is an ominous away trip to the Etihad to play a Manchester City side that will be looking to react after losing for the first time this season at Stamford Bridge. The Toffees will be attempting to be the first team to stop the Citizens winning on their home patch.

Watford return to action on Saturday afternoon as they welcome Cardiff to Vicarage Road. The Hornets won't find it easy as the Bluebirds have been on a good run of late and find themselves in 14th, just one place below the London side.