Carlo Ancelotti has won two from three Premier League games in charge of the Toffees, but suffered embarrassment in the FA Cup third round, losing to a vastly weakened Liverpool side. Everton sit on 25 points, five clear of 18th place and just six away from fifth-placed Manchester United. Brighton are in a similar position to their opponents and have just one point fewer. However, they have found it difficult to gain a good run of form with just one victory in their last five. Graham Potter will be anxiously looking over his shoulder in 14th place, as the danger of relegation is lingering.

Everton have a relatively healthy squad, with Ancelotti spoilt for choice. Jean-Phillipe Gbamin has been injured since his side's second game with a hamstring problem and will miss out again. Alex Iwobi has suffered the same fate as Gbamin, and has been out since Everton's 0-0 draw with Arsenal.

André Gomes suffered a horrific ankle fracture back in November, and is likely to remain on the sidelines until next season. Brighton are slightly more depleted than their opponents, with a number of key players receiving treatment. Ever-present Dan Burn picked up a shoulder injury against Chelsea and will remain on the sidelines for six weeks. Jose Izquierdo will also miss out, as he has done all season as he recovers from a knee injury.

Glenn Murray and Solly March could return at Goodison. March has not featured since November, as he recovers from groin surgery. Murray picked up a knock before the New Year and missed the visit of Chelsea, but could be in contention to feature against Everton.

​These two sides have not locked horns on too many occasions, clashing just 16 times. However, it is Everton who boasts the better record.

The Toffees have beaten their opponents seven times and lost just four meetings, giving them an impressive 43% win ratio. Although this percentage is high, they have only clashed five times in the Premier League, which is not a fair judgement of the two sides. In the Premier League era, both sides have recorded two victories each, with one stalemate rounding off the five meetings. Brighton have won the last two at the AMEX Stadium, and Everton were victors on the previous two clashes at Goodison.

Again, both sides are in similar form. Everton's defeat at the hands of rivals Liverpool will not help their confidence. However, Ancelotti has won two from his first three league games in charge, with the only defeat coming away at Manchester City. Brighton, on the other hand, have one just one from their previous five games, with two draws and two losses. However, these losses came against high-flying Sheffield United and a rejuvenated Tottenham side, so a loss could be understood. A draw against Chelsea on New Year's Day can also be deemed as a good result, given the status of the two clubs.

Here's how both teams have fared in their last five matches.

Both sides will head into this fixture believing that they can win and should put on a show. Everton will be desperate to redeem themselves after their humiliating loss at Anfield, whereas Brighton will see this as a chance to strike while the iron is hot. 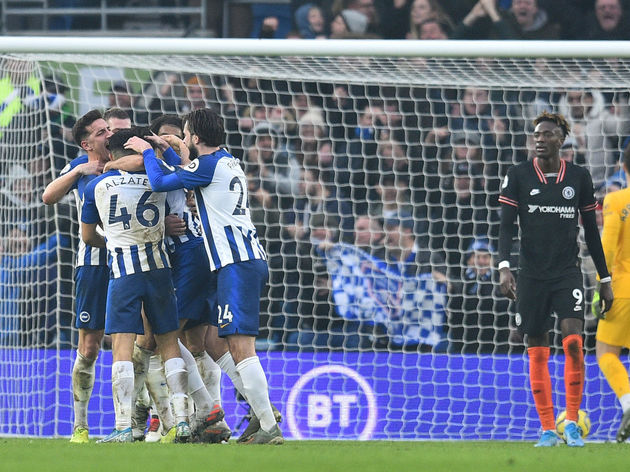 Expect an open affair, as both sides play attacking football and score plenty of goals, especially with Everton at home. A tough one to call, but the Toffees could just edge it.