​Everton welcome Manchester City to Goodison Park on Saturday afternoon as coach Marco Silva looks to put a testing fortnight behind him.

The Toffees secured their spot in the next round of the League Cup with a 2-0 victory at Sheffield Wednesday, though they have lost three of their last four Premier League fixtures. That run of results has seen the pressure on Silva further increase, with the Spaniard needing a morale-boosting win soon to ease his woes. ​City were likewise triumphant in midweek, the champions comfortably seeing off Preston in their cup tie. The Sky Blues were in imperious form during their last league outing, demolishing ​Watford 8-0 at the Etihad Stadium to silence their critics.

Here's our preview of the ​match-up on Merseyside.

The hosts are without two midfielders in Andre Gomes and Jean-Philippe Gbamin. The former is still recovering from a thigh injury sustained in August, whilst his teammate has a bruised rib.

Ex-​Everton centre-back John Stones is unavailable for the Citizens Aymeric Laporte is sidelined until the new year after damaging his knee ligaments, leaving Nicolas Otamendi as the only recognised central-defender in the senior squad.

The list of absentees is completed by Leroy Sane, who has been out of action since the Community Shield, when he tore his anterior cruciate ligament.

City have the edge over Everton over the course of history, their tally of 71 wins giving them a lead of three.

The Merseysiders have beaten their north-east rivals just twice in their last 14 encounters, the Sky Blues grabbing a crucial three points at Goodison in February to keep their title challenge on track.

Goals from Laporte and Gabriel Jesus helped Manchester City to get a 2-0 win over Everton as Pep Guardiola's side returned to the top of the Premier League table #EVEMCI pic.twitter.com/LIjeluAxGl

A towering header from Laporte gave the visitors the advantage moments before the half-time whistle to set up an anxious second 45 for City.

Though the Toffees threatened to equalise and tense moments were common for Guardiola's men, victory was sealed in stoppage-time by Gabriel Jesus' fortuitous effort.

Things are a little bit bleak in the Everton camp at present. Defeats to newly-promoted pair ​Aston Villa and ​Sheffield United have seen many supporters call for Silva's head, with performances equally as concerning as results.

Despite making heavy investments during the 42-year-old's tenure, the Toffees have seemed flat and lacking organisation, often relying on individual brilliance to bail them out of tricky situations. 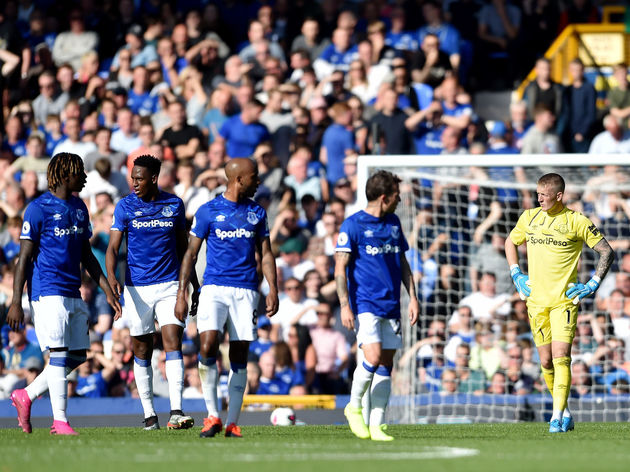 Conversely, Citizens supporters can have next to no complaints about their side's showing in 2019/20, regardless of the shock loss to ​Norwich earlier in September.

The ​Premier League trophy holders have blitzed their way past numerous opponents this term, Watford the latest to feel their wrath.

Here's how the teams got on in their last five fixtures:

​Going down 3-2 at Norwich was a wake-up call for Guardiola and his recruits - it's difficult to see them putting in another poor display anytime soon. That is an issue for Everton, who will probably need City to have an off-day if they are to topple the champions. Unfortunately for them, the Mancunians will likely be focused and professional at Goodison as they aim to chase down leaders ​Liverpool.