How England Should Line Up at the 2020 European Championships if They Want Goals, Goals & More Goals

​Gareth Southgate has named his England squad for the upcoming Euro 2020 qualifiers against Bulgaria and Kosovo, making several notable changes from the Three Lions' last round of fixtures.

Aaron Wan-Bissaka and Tyrone Mings have both received their first senior call-ups, whilst James Maddison and Mason Mount could also make their international debuts. Conversely, there is no room for the experienced Kyle Walker, while John Stones, Fabian Delph, Eric Dier and Dele Alli are all out through injury.

It's a youthful looking side, though the talent included is scary. Maddison has started the 2019/20 campaign like a house on fire and the same can be said of Mount, the pair now hoping to seal a starting berth ahead of the European Championships next year. Unfortunately, past experience suggests we are unlikely to see those two from the off. Instead, Southgate will probably go for a team that includes a lot of very familiar faces.

Goalkeeper & Defenders - Sorry to disappoint his doubters, but Jordan Pickford is not going to be dropped. He will have a four-strong backline protecting him, with Trent Alexander-Arnold, Harry Maguire, Joe Gomez and Ben Chilwell providing creative genius and raw power in equal measure.

Midfielders - Declan Rice is set to be the holding midfielder, as should be the case after his workman-like displays for ​West Ham United. It's his high-octane approach to the game that allows those around him to do what they do best. Jordan Henderson and Ross Barkley can also expect to get a start as they add drive and purpose to the engine room.

Forwards - If anyone other than Harry Kane, Raheem Sterling and Jadon Sancho begin as Southgate's attacking trident, I'll eat my hat. Being captain, the ​Tottenham Hotspur frontman is nailed on to start. Sterling continues to rip the ​Premier League to shreds, while Sancho is blossoming into a fearsome forward in Germany. Assuming all goes to plan and the Three Lions make it to the Euros, they could choose to be a bit more experimental. Here's a look at how they should set up if they're a bit more daring. Jordan Pickford (GK) - The ​Everton shot-stopper has been handed the gloves and is yet to demonstrate that he doesn't deserve them. There were several errors last term, but that is not grounds to drop a man who was immense at the World Cup in Russia. Pickford is set for a long run in the number one jersey.

Trent Alexander-Arnold (RB) - Kyle Walker's stint as England right-back is over; there's a new kid on the block. Alexander-Arnold is a sublime attacking force, racking up 12 assists in 29 ​Premier League games for ​Liverpool in 2018/19. He has the kind of inch-perfect delivery most wingers can only dream of.

Joe Gomez (CB) -  The Reds youngster missed much of last year with a broken leg, meaning he must stamp his authority now or risk dropping out of the side. We expect him to though, and as already a more complete defender than John Stones, the sky seems to be the limit for Joe Gomez.

Harry Maguire (CB) - Is he worth £80m? No. Is he one of the most reliable performers in this team? Absolutely. Maguire is a monster in the heart of England's backline, suffocating opposing forwards and bombing on with the ball at his feet. He adds plenty of steel and an aerial threat, too.

Aaron Wan-Bissaka (LB) - He may be more accustomed to playing on the right flank, but Wan-Bissaka is not about to displace Alexander-Arnold. Nevertheless, he is a fine defender and simply must be included in Southgate's lineups. If you're looking for solidity, as well as searing speed, the ​Manchester United starlet is the one to choose. Jordan Henderson (CM) - The much-maligned Liverpool skipper is criminally underrated by fans. Watch the work he gets through and you will start to appreciate what a superb footballer Henderson is. Tireless energy, a decent array of passing and clever positioning make him the best candidate to be England's midfield anchor.

Dele Alli (CM) - A real goalscoring threat on his day, the Tottenham star could play the role that Frank Lampard should've played for the Three Lions all those years ago.

James Maddison (CM) - After watching Maddison in the first few games of the season, there is no doubt he can patrol the middle of the park as England's creator-in-chief. ​Leicester City must be counting their blessings that they have such a mercurial talent orchestrating play. 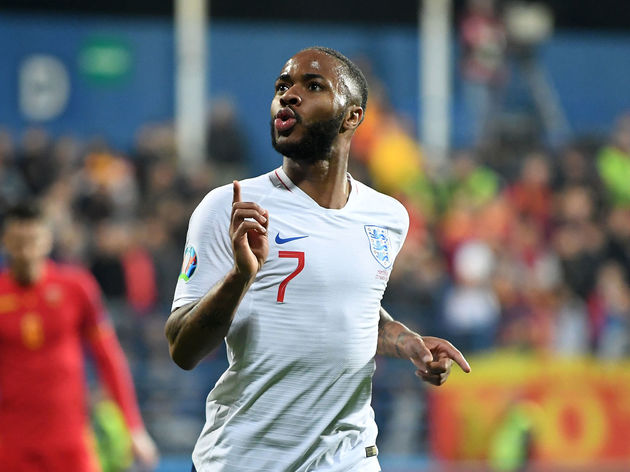 Jadon Sancho (RW) - What more is there to say about Sancho? The Borussia Dortmund wunderkind can do it all, beating teams single-handedly with his remarkable playmaking skills, eye for goal and ungodly turn of speed.

Harry Kane (ST) - The man in possession of the captaincy is a guaranteed starter - it isn't even up for debate. Clinical when an opportunity presents itself and adept at linking with the midfield, Kane is precisely the type of striker needed to play 4-3-3.

Raheem Sterling (LW) - It's not just hype, Sterling really is a world class footballer. Operating in as a free-roaming forward, he has the intelligence to hurt teams all on his own. Whether it be dragging defenders away with smart runs or popping up in the perfect position for a tap-in, the FWA Player of the Year is impossible to live with.