How Everton's Masters Football Team Would Look in 2020

Watching middle-aged men charge about the blue carpet, with sweat-drenched shirts that are perhaps a little too tight, you can't help think that Masters Football is an infinitely better post-retirement activity for ex-pros than sniping at current players from the safety of a TV studio.

As all football is put on pause, the much-loved six-a-side tournament is due a comeback when the sport returns to our screens. So, let's take a look at the modern-day participants who would find themselves lacing up in the indoor arena – with Everton the focus this time.

To make the selections easier, the following restrictions have been made regarding player eligibility: Club Highlight: Finishing fourth with a side which had replaced Wayne Rooney with Marcus Bent

Club Lowlight: Being forced into retirement with an ankle injury

While Neville Southall is the club's greatest ever keeper, at 61 years of age the living legend may be more suited to putting the world to rights on Twitter. So, who better to fill his gloves than the man who was nicknamed 'Big Nige' as a nod to 'Big Nev'? 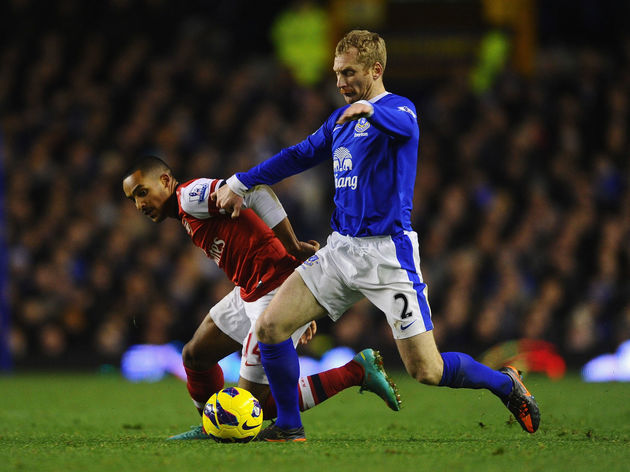 Club Lowlight: Spending those final three years getting splinters on the bench

329 goalless appearances may suggest Hibbert won't contribute going forward, but his previous experience in what can be considered the cousin of a Masters game - his testimonial - saw the Evertonian score a stunning free kick. Maybe a positional change is in order? Club Highlight: Playing every match of their fourth place ​Premier League finish in 2005

Club Lowlight: Finished his final game for the club an hour early after getting two yellow cards in 32 minutes

The spritely Kilbane still has his finger to the pulse on current football through his media career, which won't exactly help him against players from a decade ago, but his willingness to slot into any vacant position will be much appreciated as legs begin to tire. Club Highlight: Scoring a brace on the final day of the 2008/09 season to secure European football

Club Lowlight: Learning he'd been released by Everton after 16 years with the club over text...from a friend

Unfortunately, the dimensions of a Masters pitch somewhat takes away Leon Osman's party trick of scoring from long range (or rather, attempting to score from long range) but the reasonably trim pundit should be able to dictate the play, or at least last the duration. Club Lowlight: An unorthodox Twitter Q&A during the club's award ceremony in 2015

Pienaar's partner in crime Leighton Baines regrettably doesn't meet the criteria but the nippy midfielder could strike up a dynamic with Hibbert and his newfound attacking prowess. Club Highlight: Became the first Everton player to score 20 or more goals in a season for 17 years in his debut campaign

Club Lowlight: Scored 12 more goals in his remaining three seasons with the club

The Yak wasn't particularly over-reliant on his athleticism in his playing days so he'll be an expert when it comes to competing at walking pace - the speed which these events usually descend into after an energetic opening salvo. Club Lowlight: Getting sent off three times in 33 appearances

Not technically a club legend but it's always better to have Matrix on your side than as an opponent, just ask ​Zinedine Zidane. Club Lowlight: Finishing just one place above the relegation zone in 2004

Rumours surrounding Thomas 'Mad Dog' Gravesen claim he's worth north of $100m and that he's holed up in Las Vegas with a supermodel, but what isn't in doubt is the ferocity with which he'd take to the blue carpet. And, let's face it, he's not getting in ​Real Madrid's Masters team. A striker who somewhat flew under the radar in his playing days, Louis Saha actually has become something of a specialist in games between ex-pros. Not only did he score a second-half hat-trick in Ledley King's testimonial against current ​Tottenham professionals in 2014, he also netted for Manchester United in a replay of the 1999 Champions League final as recently as 2019.