​Jordan Pickford wrote penalty tactics on his water bottle in case he faced any spot kicks in England's win over the USA on Thursday.

The Everton goalkeeper made a note of the direction in which each American player was likely to shoot, if they stepped up take a penalty during the match at Wembley.

Each potential penalty taker was listed with 'left', 'right' or 'react' written next to their name. 'React' was written for Christian Pulisic's name, presumably meaning that the ​Borussia Dortmund winger is more unpredictable than his teammates and cannot be second-guessed.

It may be a friendly, but Jordan Pickford has still done his homework  pic.twitter.com/ONPQpr8gIm

​Pickford used these same tactics to end England's penalty shootout hoodoo against Colombia at the 2018 World Cup, correctly guessing that Carlos Bacca would go left with his kick.

Pickford has saved two of the three penalties he has faced in the Premier League season, denying ​Manchester United​Crystal Palace

"I forgot to do my research to be honest but watching other games back and you can see he [Milivojevic] is a very good penalty taker so I was pleased to save that penalty," said Pickford at the time, quoted by ​the Sun. 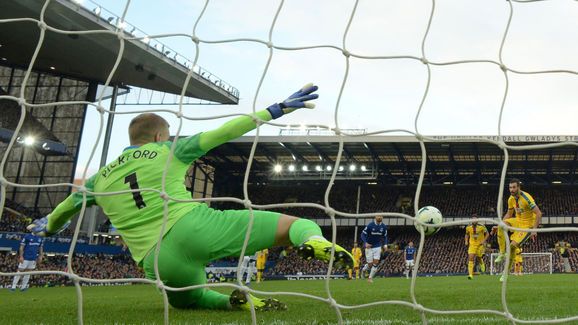 Pickford's research was not needed on this occasion as England ran out comfortable 3-0 winners thanks to goals from Jesse Lingard, Trent Alexander-Arnold and debutant Callum Wilson.

England's number one only played the first 45 minutes before Southampton's Alex McCarthy came on for his international debut at half time.